A week of two halves 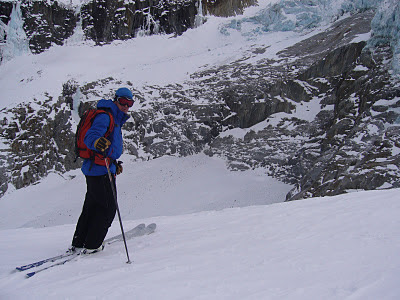 Just finished a fantastic week of off piste skiing with Russell Bragg
It was Russell's first real commitment to off piste skiing and he took to it like a Duck to Water. On our first day we headed up to Le Tour where despite it being unpleasantly cold we got to grips with avalanche transceivers, probes skins ski touring skis in essence all the stuff that's good to know before heading off into the wilderness.

On the Tuesday we completed our first ski tour together by heading over the col Crochue col Berard behind La Flegere.

Wednesday we ventured into the Valley Blanche and skinned over to Italy for a Cappuccino before skiing all the way back to Chamonix but not with out stopping at Mottets Buvet for a beer.

Thursday we thrashed our legs skiing at Grands Montets. Then the weather changed and we got snow. Lots of snow. So much snow that Chamonix closed. This didn't stop us because we just had two exceptional days skiing powder in Combloux. Russell said it was the best skiing he had ever had in his life. I added so far...
Posted by Mark Seaton at 5:08 pm No comments:

Some of the best off piste skiing - Ever 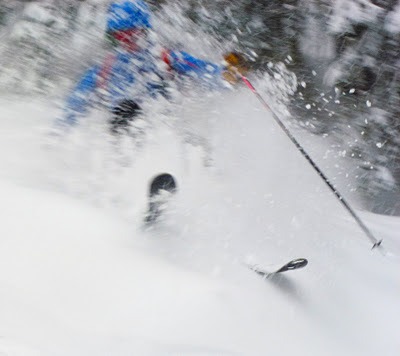 Just finished a stint of 10 days contentious skiing where it snowed most days. Chamonix was shut several times but we just jumped in the Land Rover and skied in Combloux where we enjoyed sensational powder skiing.
On one of the clear days we were lucky enough to find ourselves at La Flegere where I had the best conditions i have ever had there.
Posted by Mark Seaton at 9:50 am No comments: