Andrew Parker had harbored a dream to climb Mt Blanc since a failed attempt nearly 20 years ago. Recently the opportunity to have another go materialised 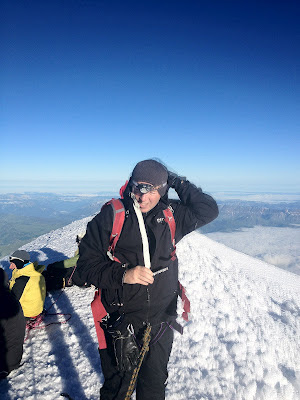 because he was able to take some holiday between jobs.

We met and had a couple of warm up days before heading up to the Cosmiques Hut in order to gain some acclimatisation. It was the following morning that the plan started to unravel because the wind had shut Aiguille du Midi and we could not get back to Chamonix and therefore we could not keep our booking for the evening in the Tete Rousse Hut.

More pressingly we were stuck. So I decided that we should try and escape across the Valley Blanche to Italy. This is what we did , but the conditions were difficult , poor visibility , soft snow and big crevasses a bad mix. Eventually we arrived in Courmayeur where we took the bus back through the Mt Blanc Tunnel.

We were now a day behind schedule which we had to make up. Of course we were not helped by the fact that the train on Mt Blanc is shut and so we had to start walking a couple of hours sooner than we would have chosen.

Six hours and 1790 meters of ascent interspersed with some rain showers we arrived at the Gouter Hut. Not the new shinny one but the old knackered one. [The new one isn't ready yet .]

2.00am Breakfast , 2.45 am get away and we were off. Conditions were good although above the Vallot Refuge it did get very windy. 7.45 am we arrived on the top.

2700 meters descent later the train was still broken.
Posted by Mark Seaton at 2:20 pm No comments:

Pam Mazoyer and Chris Moss joined me for three days in 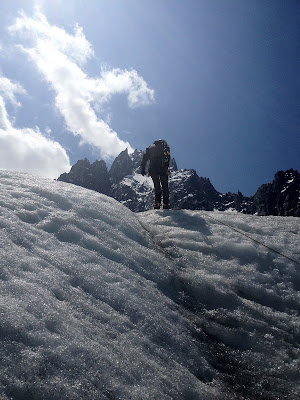 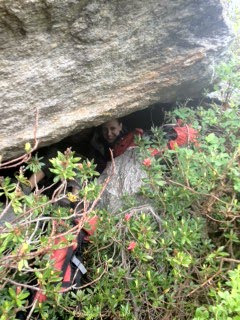 order to improve their mountaineering skills.

A day on the Mer de Glace was followed by a fantastic traverse of the Aiguille du Crochue. Then on our 3rd day it rained so we hid in a cave until it stopped. We then drove to Switzerland for some alpine rock climbing training. Only problem was the setting wasn't very alpine - a quarry, a quarry I believed to be disused but clearly wasn't. It was noisy but it didn't rain.
Posted by Mark Seaton at 1:56 pm No comments: 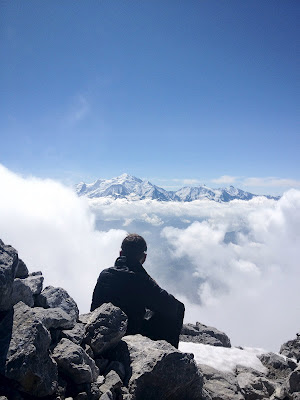 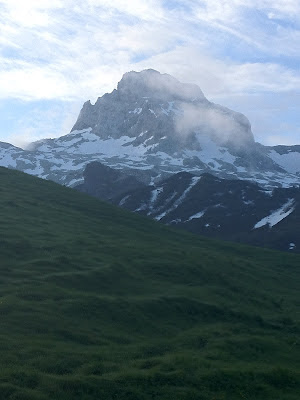 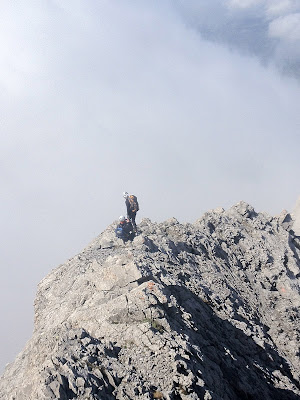 The weather hasn't been very co operative and anyone with out a flexible state of mind is likely to have been frustrated. Fortunately my team were very flexible and open to all suggestions and so Agust, Turi & I headed around to the Aravis where they made what was in all probability was the first Icelandic ascent of Pt Percee from the Col du Verte via the south ridge in very wintery conditions. Yet as we sat on the summit the clouds parted like a curtain to reveal one of the best views of Mt Blanc in the alps.
Posted by Mark Seaton at 9:25 pm No comments: