The Ballad of Idwal Slabs

So I have been back to the Idwal Slabs for the first time in 20 years. Reuben drove over from Manchester to join me. It did not rain which it did the last time I was here. In fact every time I have ever been here.


I'll tell you the tale of a climber; a drama of love on the crags;
A story to pluck at your heartstrings. And tear your emotions to rags.
He was tall, he was fair, he was handsome;
John Christopher Brown was his name;
The Very Severes nearly him bored him to tears ------
and he felt about girls much the same.

Till one day, while climbing at Ogwen, he fell (just a figure of speech)
For the president's beautiful daughter, named Mary Jane Smith---What a peach!
Her figure was slim as Napes Needle;
Her lips were as red as Red Wall;
A regular tiger, she'd been up the Eiger...
North Wall, with no pitons at all!

Now Mary had several suitors, but never a one would she take,
Though it seemed that she favoured one fellow, a villain named Reginald Hake;
This Hake was a cad who used pitons,
And wore a long silken moustarsh,
Which he used, so they say, as an extra belay----
But perhaps we're being too harsh.

John took Mary climbing on Lliwedd, and proposed while on Mallory's Slab;
It took him three pitches to do it, for he hadn't much gift of the gab.
He said: "Just belay for a moment---
There's a little spike by your knee-
And tell me, fair maid, when you're properly belayed,
Would you care to hitch up with me?"

Said Mary, "It's only a toss-up between you and Reginald Hake,
And the man I am going to marry must perform some great deed for my sake.
I will marry whichever bold climber shall excel at the following feat
Climb headfirst down Hope, with no rubbers or rope,
At our very next climbing club meet!"

Now when Mary told the committee, she had little occasion to plead,
For she was fair as a jug-handle hold at the top of a hundred foot lead.
The club ratified her proposal,
And the President had to agree;
He was fond of his daughter, but felt that she oughter
Get married, between you and me.

There was quite a big crowd for the contest, lined up at the foot of the slabs;
The Mobs came from Bangor in Buses, and the Nobs came from Capel in Cabs.
There were Fell and rock, climbers', and rucksack,
And the pinnacle club (in new hats)
And a sight to remember!... an Alpine club member,
in very large crampons and spats.

The weather was fine for a wonder; the rocks were as dry as a bone.
Hake arrived with a crowd of his backers, but John brown strode up quite alone;
A rousing cheer greeted the rivals;
A coin was produced, and they tossed.
"Have I won?" cried John Brown as the penny came down.
"No you fool!" hissed is rival, "You've lost!"

So Hake had first go at the contest; he went up by the Ordinary Route.
And only the closest observer would have noticed a bulge in each boot.
Head first he came down the top pitches,
Applying his moustache as a brake;
He didn't relax till he'd passed the twin cracks,
And the crowd shouted "Attaboy Hake!"

At the foot of the Slabs Hake stood sneering, and draining a bottle of Scotch;
" Your time was ten seconds," the President said, consulting the Treasurer's watch.
Now Brown. if you'd win, you have to beat that."
Our Hero's Sang Froid was sublime;
He took one look at Mary, and light as a fairy,
Ran up to the top of the climb.

Now though Hake had made such good going, John wasn't discouraged a bit,
For he was the speedier climber Even Hake would have had to admit.
So smiling as if for a snapshot,
Not a hair of his head out of place,
Our Hero John Brown started wriggling down...
But Look! What a change on his face!

Prepare for a shock, gentle ladies; gentlemen, check the blasphemous word;
For the villainy I am to speak of is such as you never have heard!
Reg. Hake had cut holes in the toes of his boots,
And filled up each boot with soft soap!
As he slid down the climb, he had covered
With slime every handhold and foothold on Hope!

Conceive (if you can) the terror that gripped the vast concourse below,
When they saw Mary's lover slip downwards, like an arrow that's shot from a bow! "
He's done for!" gasped twenty score voices.
"Stand from under!" Roared John from above.
As he shot down the slope, he was steering down Hope...
Still fighting for life and for love!

Like lightning he flew past the traverse... in a flash he had reached the Twin Cracks
The friction was something terrific---there was smoke coming out of his slacks
He bounced off the shelf at the top of pitch two,
And bounded clean over it's edge!
A shout of "He's gone!" came from all... except one;
And that one of course, was our Reg.

But it's not the expected that happens, in this sort of story at least;
And just as John thought he was finished, he found that his motion had ceased!
His braces (Pre.War and elastic)
Had caught on a small rocky knob,
And so... safe and sound, he came gently to ground,
'Mid the deafening cheers of the Mob!

"Your time was five seconds!" the President cried. "She's yours, my boy...
take her, You win!"
" My hero!" breathed Mary, and kissed him; while Hake gulped a bottle of Gin,
And tugged at his moustache and whispered,
"Aha! My advances you spurn!
"Curse a chap that wins races by using his braces!"
And he slunk away ne'er to return.

They were wed at the Church of St. Gabbro; And the Vicar, quite carried away,
Did a hand-traverse into his pulpit, and shouted out "let us belay"
John put the ring on Mary's finger
A snap-link it was, made of steel,
And they walked to the taxis
'Neath an arch of ice axes,
While all the bells started to peal.

The morals we draw from this story, are several, I'm happy to say:
It's virtue that wins in the long run; long silken moustaches don't pay;
Keep the head uppermost when you're climbing;
If you must slither, be on a rope;
Steer clear of the places that sell you cheap braces---
And the fellow that uses soft soap!
by
Showell Styles
Posted by Mark Seaton at 9:59 am 2 comments:

Two days on rock One one Ice 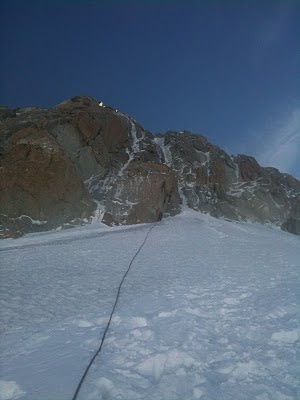 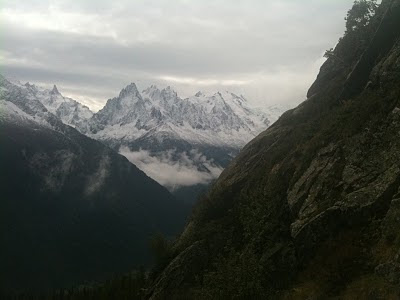 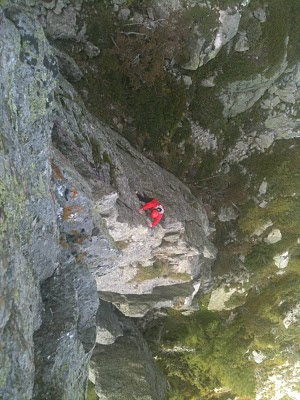 Roger Brookes joined me for three days climbing. It was a steep learning curve: On our first day we climbed the Yellow Route at Les Chesery. This was Roger's multi pitch climb.
The next day we climbed the very famous Chere Couloir on Mt Blanc du Tacul. This was Rogers first Ice climb.
On our last day the weather was unsettled so we decided to play it safe and climb the Voie Caline
Posted by Mark Seaton at 9:33 am No comments: