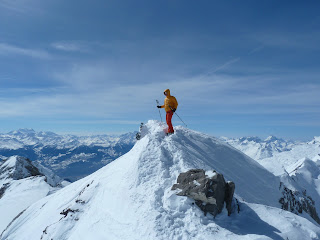 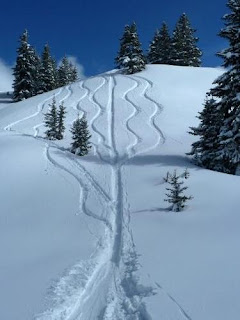 Posted by Mark Seaton at 5:18 pm No comments:

The Foehn; The word no skier ever want to see in the forecast

Yes the foehn is the word that is like a death sentence to a good skiing forecast. Its effects are well documented but needless to say it can wreck the best laid plans.

This is what happened to me Ian Ansell and Charlie Crossley Cook. 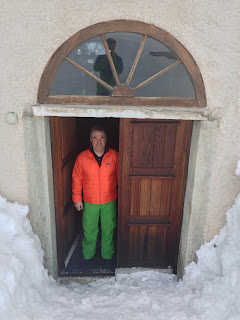 On our 1st day we decided to skin up to the Gd St Bernard Monastery [in beautiful weather] Yet by the next day the dreaded foehn had kicked in. We did manage to climb Mt Fourchon and then ski across and down to La Fouly but the conditions were frankly crap and it was a relief to get the skis off.

So we headed around to La Thuile because it was due to snow in Italy. It did not and we skied around La Thuile firstly finding some half decent snow before the mist socked in and the wind blasted us relentlessly.
The forecast was still for snow which the next day eventually came and we managed to get some excellent skiing the trees in Courmayeur .

Our final day was in Chamonix where we again struggled with the weather and poor snow conditions and contented our selves with skiing the pistes all over Chamonix
Posted by Mark Seaton at 1:23 pm No comments:

Klosters: Finest lift accessed off piste there is?

It is 3 years since the final and last time I skied with the world famous flying Grannies in Klosters. I had been their Guide for 17 years and had got to know the area very well. Sadly the party felt they were too old to continue. I have very fond memories of theses trips, not to mention some of the best skiing I have ever had.
It was therefore with some nostalgia that I turned up with in Klosters last Monday to ski with my 1st post Flying Grannies party.
This was to be 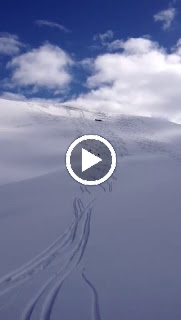 a new group made up of very strong experienced skiers, Dave Coustick Richard Oxlade, Ian Searle, Jim Briggs and Richard Woollcombe who were all engaging my services for two key reasons:
1 : to find the best snow and pitches.
2 : So they did not have an argument about who was in charge and which direction to go in!

So the pressure was on to show them the best Klosters has to offer. In my view it has the best lift accessed Off piste skiing anywhere I have ever been and the place did not disappoint.
On our 1st day we started by skiing the north facing slopes from the Gotschana cable car. It had not snowed for a while but it had kept cold and so the snow quality was excellent.
On Tuesday we headed over to the Madrisa where we skied down to Slappin. The snow was only quite good and with the bar having been set so high by the 1st days skiing we headed back to the Gotschana where we dropped off the Gmienboden in untracked snow all the way to Sernus.
On Wednesday we skied over to Davos, dropped off the back into Wolfgang then took the bus up to Pischa ski area. A quick coffee and we then we skinned up to the summit of the Pischahorn. It was then a long run back to Klosters and it has to be said some challanging snow.
It was becoming even more clear to me that like the Flying Grannies always said the best snow is above the Gotschna and so we returned. This time we made skied off the back of the Weissfluhgipel down the Diretissima again finding exceptional snow. At the bottom we stuck on our skins and climbed up to Barga before making an unforgettable descent all the way to Kublis.
On Our final day Friday we decided to take no chances and return to where we knew the snow would still be good. It was so good that Ian Searle thought that it was the finest descent he had ever done. He should know because like tghe rest of the group he has done an awful lot of skiing.
We again dropped of the back of the Weissfluhgipel but then this time traversed along the ridge and over a small peak, down a very very steep gulley which finally gave access to acres and acres of untracked snow. at the bottom we stuck the skins on for a fairly brutal and hot ski to the top of Christenstien. This set us up well for another incredible descent to Kublis and an end of the trip celebratory beer 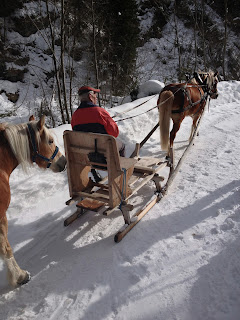 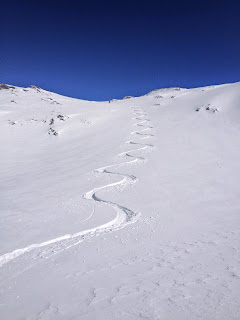