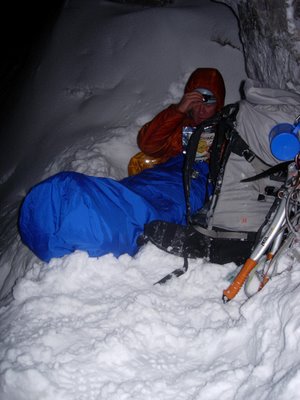 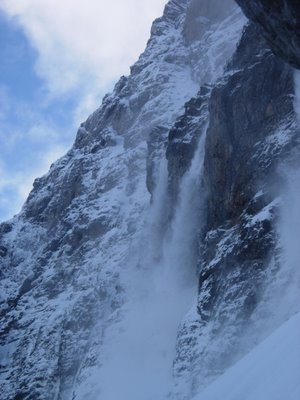 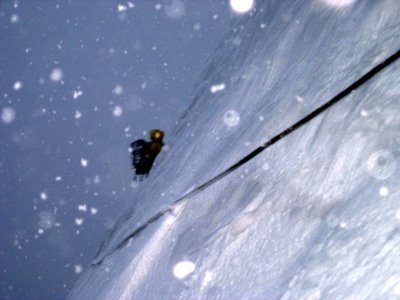 Charles Sherwood and I went round to the North Face of the Eiger with a perfect five day forecast.
We set off in good conditions and climbed really quickly. But as we got to the top of "The Difficult Crack" it started to snow. The weather came from nowhere.Thinking it was just a passing shower We pushed on and then it just dumped and dumped snow as if someone was emptying bags of flower over our heads.
We had really sketchy climbing to get to the Hinterstoisser Traverse where we just got hit by monster spindrift avalanches.We managed to get to the Swallows Nest bivy which is sheltered from above and slept the night there.During the night the weather cleared and the helicopter came in and took two groups off who were below and who were caught in "no-mans land" and had fallen off.
The helicopter reluctantly offered to pick us off at about 10.00pm and they were relieved when we said we were okay and intended to carry on in the morning. However when morning came it was clear that we were not going up.Going back looked like a Guides worse nightmare so we got a REGA helicopter to pull us off at about 9.00am.Sunday morning.
Posted by Mark Seaton at 9:10 am