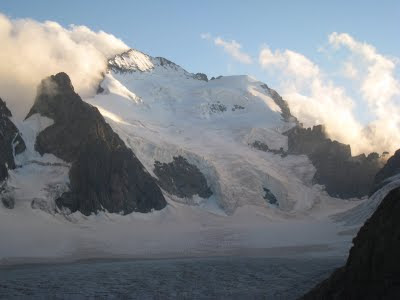 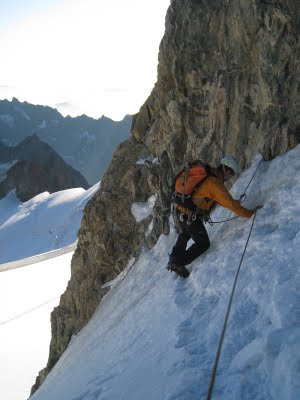 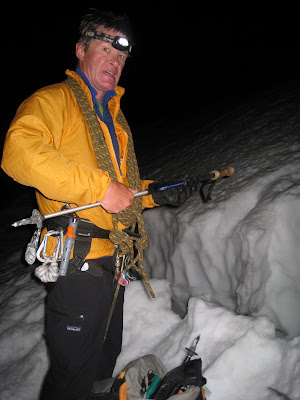 The alarm went off at a grim 3.30am. After a quick breakfast we were out of the hut door at 4.00am. We scrambled down the scratchy path and on to the glacier. We strapped on our crampons roped up and set off. We immediately lost the path because all the snow had melted and we were left with glacier ice to follow around a maze of crevasses. Nevertheless we plodded in the right direction until we picked up the path in the snow higher up. After about an hour and a half the climb became a lot steeper and then came to sudden stop. Our progress halted by a monster crevasse. It was not simple to jump over it on the crevasse from the down hill side.
We continued until we arrived at the Dome des Ecrins where everyone else from the hut that morning was going. We turned our attention to the true Summit the Barres its- self. The climb moves from snow to a wonderful rocky scramble where we reached the top in about an hour from the col. We sat around on the top for about 20 minutes contemplating the knee smashing descent of 2300 vertical meters back to the car.
Posted by Mark Seaton at 11:06 am