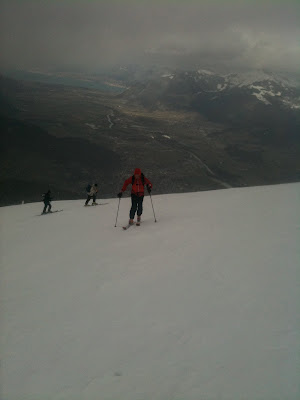 Well finally it happened. So far until today we have had great skiing. All that changed. Chris Dovell and his pals joined me for a days ski touring. The weather was crap. Rain and snow mixed with very strong winds[which further west claimed 45 lives in France] But not to be put off we left France and went to Switzerland. Our first plan was to go to a very small village called Mex. But the road was blocked by wind blown trees. We quickly came up with a plan B which was to climb the the Dent des Valerette high above Monthey. Strangely the sun came out and the wind dropped [for a while] and we had a pleasant ascent and great views all the way to lake Geneva. However the ski down was horrific. Breakable crust covered porridge like snow. The only person who managed a series of half okay turns was Dovell who was cleverly on fat skis. I was not on fat skis and kept sticking my head in the snow and then blamed my equipment. For Dovells friends it was; shall we say an unforgettable day out.
Posted by Mark Seaton at 9:06 pm