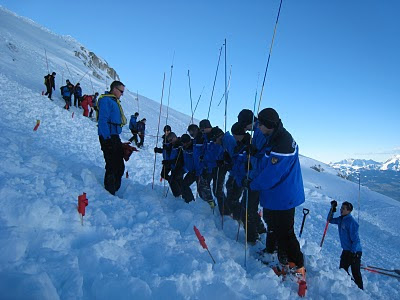 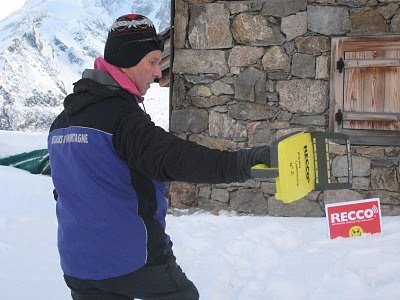 To day I joined the Mountain Rescue for a big avalanche practice search at the top of Brevent.

Each year just before the season there is always a huge avalanche practice organised by La Chamoniarde a voluntary operation made up Ski Instructors, Mountain Guides, Pisteurs, Doctors,Firemen and the Police.
The purpose is to have enough trained people to deal with a catastrophic avalanche that might take out houses or major communication links.

In the morning there was a demostration of the equipment such as the use of avalanche transceivers, how to deal with helicopters, how to help the dogs.

In the afternoon a simulated avalanche was created at the top of Le Brevent. We were divided into teams of 15 people . There were 20 teams. We all lined up shoulder to shoulder and practiced a Probe search until we eventually found the 4 "victims" which were buried.

As a treat [as the ski station hasn't opened for the season] we all got to ski untracked snow from the top of Brevent to Plan Praz.
Posted by Mark Seaton at 6:55 pm