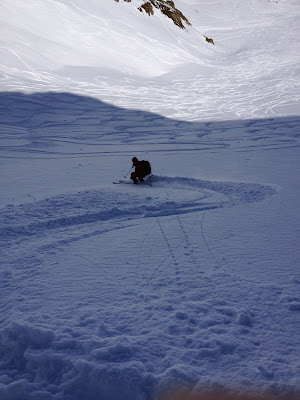 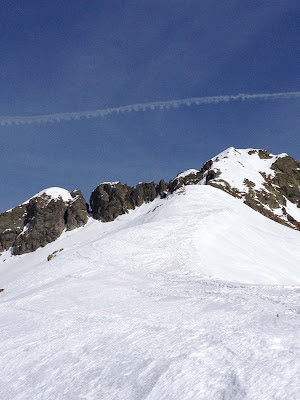 The seemingly endless love of striking has made the logistics of getting back from various ski tours a challenge.

Before this I skied the Valley Blanche a couple of times. Bitter winds made the descent of the ridge testing. Too much so for one particular skier who might possibly go to the top of the league table for the shortest ever attempt to ski the VB. It lasted half a turn before he fell over and dislocated his shoulder. The resucue helicopter had fun and games finding a place to land because of all the skiers and the high wind.
Conditions were much better lower down and we even found some fresh snow.

On Saturday I did the Col Crochue/ Col Berard ski tour with Reuben Berg. At the top of the 1st col it was very windy and the snow was like concrete, yet when we got into the Berard Valley we found the snow had been unaffected by the wind and we got fresh tracks. After a quick beer we moved to the Gare to wait for the train which never came because there was a strike. Good of them to tell us.

On Sunday I headed back on the same tour but this time with Richard Lewis , who had requested that he wanted to go home very tired. Therefore we headed up and over the Breche Berard. A couple hours extra up hill. But it was worth it because we found really good snow for the descent. It was once down that we had the fun and games with the replacement bus for the striking train. The issue was the bus wasn't big enough and a load of people got left behind.

To day I skied at Le Tour with Catherine Lucy-Kate and Helen - mothers who had escaped from their children for a days off piste skiing.
Posted by Mark Seaton at 4:46 pm