I bailed from Arolla the previous day and then found my self in Zermatt the next day. I was with Greg Knot and Bill Mills with the plan of attempting what is often called the Italian High Level Route.

The issue was there was still strong winds. We arrived at the top Kliene Matterhorn to find that they had closed the lift. It took some powers of persuasion for them to open for us. Finally we were on our way. Surprisingly there was comparatively little wind and we skied across and down to the magnificent welcoming Ayas Hut.

Saturday 28th the weather was okay , but not good enough for us to attempt the proposed traverse of Castor plus unbeknown to me our next planned hut the Quintino Sella had decided not to open this spring. So we skied down towards St Jaques and then skinned over what proved to be a very big col. In fact it was so big that that someone in a parallel group decided they were too tired and ordered a helicopter rescue. No injury just tired !

We skied down a spectacular run into Gressoney until the snow ran out and had a very welcome Pannini and cappuccino before catching the cable car to Punta Indren . An hours skin took us to the Mantova Hut.

Sunday 29th A hurricane hit Chamonix. There was no power for most of the day and hundreds and hundred of trees smashed through houses , cars and cut roads off. Windows got blown out of buildings cars got turned over amd it was general may- hem . Mean while in the Mantova Hut we had a lot of new snow overnight. It was clear that we would be unable to traverse over the col des Lys and back to Zermatt. We decided to head down to Gressoney. By way of a consolation prize this was not bad because we hit some exceptional snow and some very good skiing. 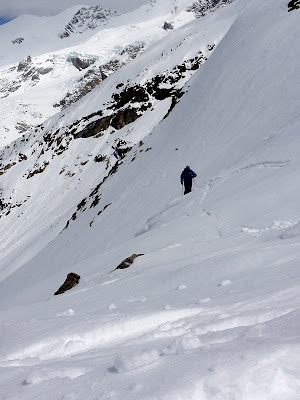 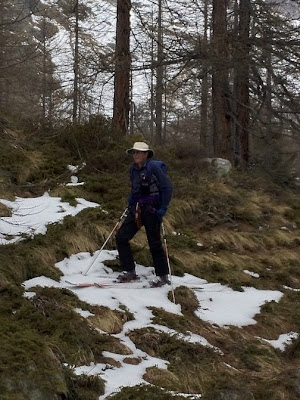 ed to catch the lift up and over and back into Zermatt. Only problem was that the lift was closed because of the storm and we were forced to hole up in Cervina for the night. This turned out to be very good because we found a good hotel and a very good [if slightly quirky] restaurant.

Monday 30th. Eventually the lift opened and we made a dart for Zermatt always fearing the lift might close at any stage.
Finally we made it back to Zermatt, where we admitted defeat because the weather and conditions were still against us.
Posted by Mark Seaton at 8:12 am