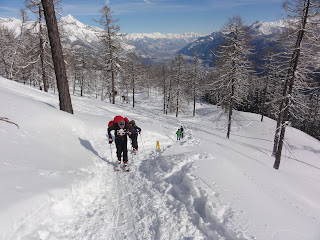 We decided to start with the beautiful secluded ascent of the Arpille an ideal place to kick off your ski touring career. However unbeknown to me there was the annual ski touring race to the summit. Fortunately by the time we got going the race was well and truly over but race refueling stations were still open and we availed ourselves of them.
We arrived at the summit of the Arpille and were all alone. I then had a shock as we descended as there had obviously been a major mis- communication because two of the team could not actually ski. Consequently the descent took longer than anticipated.
We agreed to split into 2 teams and one of the party decided to go back to being a snowboarder having accepted that a day at Milton Keynes Snow Dome doesn't equip you with the skills for off piste skiing.
Anyway the next two days it snowed and snowed and we had very good powder in Courmayeur and then in La Flegere where Justin claimed he had skied one of the best pitches ever. AND Justin should know because you will have to go along way to see someone who skis better than him.
Posted by Mark Seaton at 7:49 pm