Finally Lloyd gets to see a view

In July 2014 Lloyd Donavan came out to join me work six days climbing. It was without doubt the worst week of weather I had ever known since I have been guiding. So this year Lloyd came out in August with the "promise" that it couldn't be as bad as the previous year.

Well the first 2 days he was here it never seemed to get light and it rained stair rods continuously. The only conclusion was that LLoyd was cursed.

Then there was an improvement in the weather and we decided to climb above La Flegere. Cursed again - while everywhere else it was a pleasant late summers day we some how managed to find ourselves in a sandwich of torrential rain. We made a pathetic attempt to climb the L'Index but after 2 pitches prudence took over and we retreated.
Once back in the valley we enjoyed an afternoon climbing above Averyon.
Then we decided to leave Chamonix and go some where else. Italy. Our plan was to head to Gressoney.

We headed up to the Gniffetti Hut in zero vis.

The next day was different. Lloyd got agoraphobia because this is the first time he had see anything in a long while. 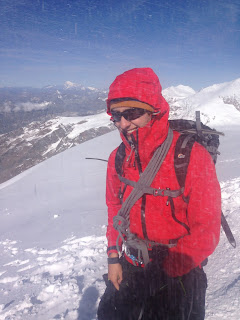 We climbed the Vincent Pyramid , the Balenhorn Coro Nero before dropping back down to the hut for a second night. 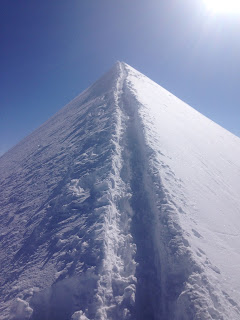 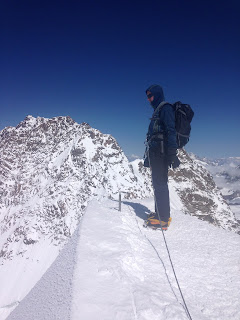 The food and welcome in the hut was as good as ever and we got a stellar sun set looking down on the Matterhorn. 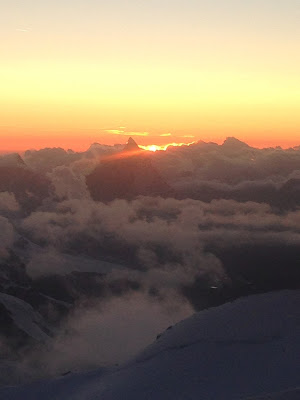 In the morning we also got an equally stellar sunrise from the toilet window this time looking down on the Italian Lakes and Milan. 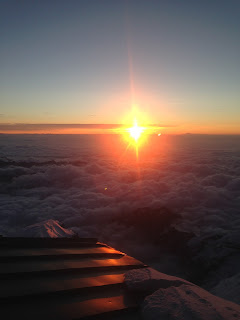