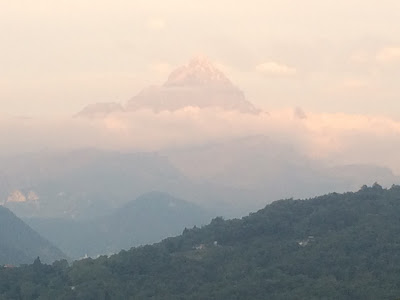 SO-1750 vertical meters descent from the Aigle Hut later we arrived in La Grave. La Grave is about as far away form where we left the car 4 days ago as it is possible to get in the Alps. This problem was solved with by a very pleasant taxi man at a very reasonable 80 euros for a two hour taxi ride. Especially in the context of the Chamonix cartel of taxi drivers who charge 50 euros to go from Chamonix to Argentiere. 8 km !]

So back at the car Charles and I talked about what we should do next. The plan had been to spend a couple of mellow days rock climbing around Alfoid before attempting the East Ridge of Monte Viso. Yet when we checked the weather forecast the perfect weather was forecast to only last a couple more days. Further in mid September bad weather usually means snow , which sometimes doesn't clear and that can mark the end of the alpine climbing.

So if we were going to attempt the climb it had to be the next day. This meant retracing the road back to La Grave , then going over to Briancon climbing out over into Italy passing through the ski resort of Sestriere and down and down to just outside Turin before driving into the foot hills of Monte Viso. Yet there is a good incentive because at the end of this marathon drive there is the most perfect hotel - the Hotel Colletta. Run by a delightful family who have been there for several generations . It has very good food and a very good wine list.

Semi refreshed,the next day we drove up to the town of Crissolo and from there drove up to the road head at 1800 meters.
This is a very popular destination in its own right because is the source of Italy's longest rivers the Po. The actual source is somewhat underwhelming and if you weren't told by a sign you'd think you were walking past any bit of boggy ground. 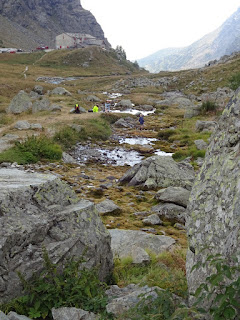 The path to the Rifugio Qunitino Sella is and was very beautiful. At least until it started lashing it down. One of the issues with Monte Viso is that because it is so massive and so isolated it generates its own weather. By weather I mean poor weather. More often than not the time around mid day is shrouded in mist.[Last year I failed to climb the East Ridge because it was engulfed in an impenetrable fog.]

Although walking up in the rain was unpleasant , it did eventually stop just before we got to the Hut. 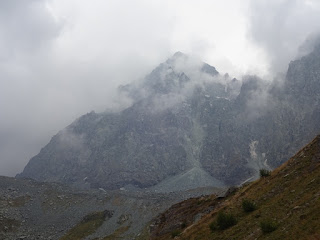 The hut was busy , because it is on a very popular trek and it is a destination in its own right. Plus the normal route on Monte Viso is hugely popular late in the season when all the snow has gone because then it isn't necessary to use an axe nor crampons.

Fortunately the East Ridge was not busy. Charles and I set off at about 5.00hrs in the dark. After about 20 minutes we were climbing up eternal shale while attempting to find the start of the route. I was making a bad job of this when the only other party we were to see on the route, a French Guide with prior knowledge, past us and identified the start. This is a good reason why being first out of the blocks is not always a good idea when you haven't actually done the route before!

Nevertheless once we were established on the climb everything was simple. Albeit long: 1500meters of ascent. We paused to watch the sun rise over the Italian plain 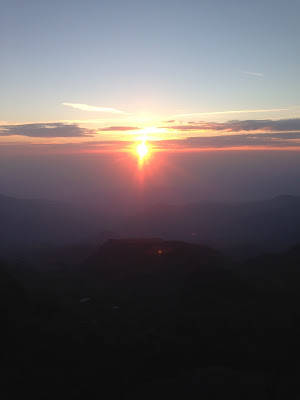 A little further up I was left to ponder why someone had abandoned their bike on the climb?; 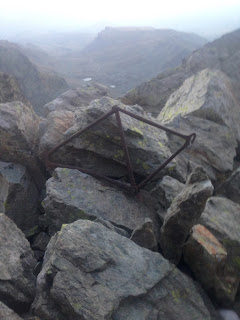 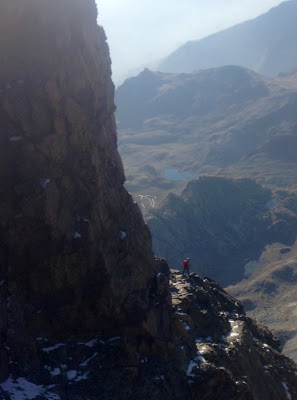 About half an hour from the summit our route turns left and joins the normal-route and then onto the summit where there is a giant cross because this is Italy and they like their crosses. 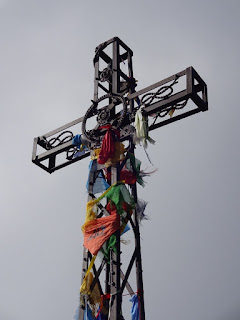 There were many people on the summit and the scene was seemingly fairly stereotypical of a Sunday in Italy : Chaotic. Charles and I managed to slalom around most of the groups reasonably efficiently , then we had a clear route all the way to the hut and managed to make it from the summit to the hut in under 4 hours.
We repacked our bags at the Hut and then psyched ourselves up for the walk back to the car. We were particularly keen to do this because another meal and beds at the Hotel Colletta was a great incentive to get back down.