The majority of people who have little mountaineering experience who dream of climbing Mt Blanc hire Mountain Guides. Although there are some slight variations most of these groups follow roughly the same template. Namely a three day two nights in mountain huts glacier expedition. The main goal is to acclimatise . This is mission critical. The perceived view is that once you have the acclimatisation it is important not to lose it by spending no more than a night in the valley before heading off to one of the Mt Blanc mountain huts , either the Tete Rousse, the Gouter or the Cosmiques hut depending on where you can get a reservation. This has been the standard practice for at least a generation and it still works well for most people. Yet certain mountaineers have begun to question if there is not another way. This premise starts with the view that rest and a good nights sleep is as important as acclimatisation when the "Big Picture" view is taken. For example someone new to mountaineering who has just "endured" two nights in mountain huts with poor sleep and big physical days needs a proper rest before going onto a challenge which more often than not is the most physically demanding thing they have ever done in their lives. Put simply the view that once you have acclimatised you need to stay high in order not to loose the acclimatisation is no longer sacrosanct. For example as Steve House the accomplished mountaineer and Guide notes in his book "Training for the Modern Alpinism" The super-rich Everest Oneabees are acclimatising on Everest and then chartering Helicopters back down to Katamandu for some R&R before flying back to Everest for the summit attempt. They are generally in a better shape than the people who stay at base camp. While this type of narcissistic "mountaineering" can be debated, the point is that quality rest at low altitude can be more beneficial that suffering at higher altitudes. [Of course there will always be people who can not acclimatise no matter what protocol they follow.] While it may be impractical for people with limited holiday time who are on a climbing course to adopt such a strategy, it is an interesting option for people who live and work [say around Geneva]. They can go on a three day climbing and acclimatisation trip , then go home, sleep in their own bed , rest , get on with their normal lives and then return the next week for the summit attempt. This is precisely what Catherine Lewis and I did and it worked like a dream: 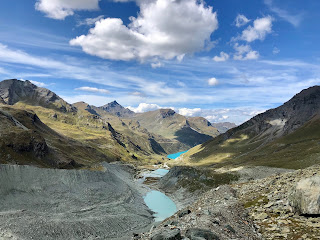 For the first part of our trip we met at the road head at the end of the Lac de Moiry. Catherine brought her husband Richard along. This was their first climbing trip together [ever] and one of the very few times they had been away with out their children for a very long time. We packed up and headed up to the glacier for some ice axe and crampon revision work. We then continued up to the Cabane de Moiry. This is an ideally positioned hut because it is high at around 2800 meters [consequently perfect for acclimatisation] and it has a selection of peaks which are ideal for training, they are not too bigger days , so you don't end up exhausted and demoralised 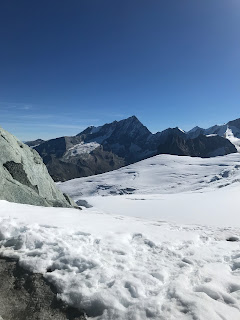 AND the views of the surrounding peaks are as good as anywhere in the world. After our first night [where we had showers albeit cold showers] we headed out and climbed the Pointes de Mourti 3564m. It was absolutely perfect because it has some simple scrambling near the summit which is excellent practice for the climb up to the Gouter Hut on Mt Blanc. 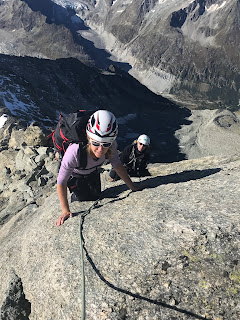 We also had impressive glacier scenery to pass through. 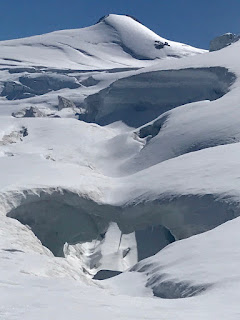 We arrived back at the Hut for beers on the terrace. The Hut guardian had decided to round off the season by showing a series of esoteric mountain based films . After dinner we were treated to one about the great Walter Bonatti. On our third day together we climbed the north ridge of the Pigne de la Lé 3396m. A rocky scramble which took about two hours. From the summit we descended the glacier on the south side, made our way back to the Hut , collected the extra stuff we had left and descended to the car park. Thereby completing a wonderful three day trip . Catherine was adamant that this was a wonderful expedition in its own right. All was left was what is becoming a bit of a tradition: a swim in the Lake. Which by the way was all part of the Master Plan... 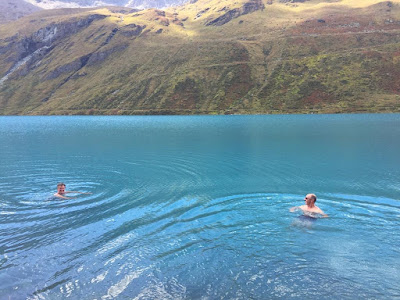 PART TWO. A key piece of this strategy is flexibility. Flexibility is the name of the game. It is a mind set. Without it, you might as well find yourself another pass time. You need flexibility so that you can have the optimum weather and conditions but equally so you can get a booking in the key Mt Blanc Huts. For example, instead of phoning the hut and asking for a specific night. The strategy was to ask "Have you any nights free in the next week?" This clearly took the guardian by surprise because instead of saying "No we are full" he said he would check and call me back! Which he did offering us the two beds we needed. It also goes with out saying that a team of two: 1 Guide - 1 client increases the flexibility [ not to mention safety ] of the whole project. Further more I got us a reservation in the Tete Rousse which meant we could spread the ascent over three days and dramatically reduce the effort needed the first day. Catherine drove up from just outside Geneva where she lives and we met at Bellvue cable car in Les Houches. We met at 10.00hrs. Because it was mid September it was quiet. It also made a difference that the Nid Aigle train had shut the previous day. We set off walking to the Tete Rousse Hut on a beautiful autumn day. Three hours later we were settled into our first beer.[Or I did]. I have spent more nights in the Tete Rousse than I care to remember , yet there was something different about this night. It was late in the season it was cold and clear therefore conditions were perfect. Perhaps because of this there was a relaxed atmosphere. More over there were a unique set of Guides in the hut that night. Stuart McAleese was just down from climbing Mt Blanc for the umpteen time this season - who gave us key information - it had been very cold. Next there was Blaise Agresti. The charismatic ex head of the PGHM Mountain Rescue, not just for Chamonix , but the whole of France. In my line of work a very important person. His client was a journalist for La Monde who was writing an article about Mt Blanc - although I never got to understand if he was there to say climbing Mt Blanc was a good or a bad thing. Next there was Thierry Renalt. Indisputably one of the best climbers France has ever produced. He has always been a brilliant Guide and once again he was here demonstrating just how good he is by having the patience of a saint to help an old guy reach the summit of Mt Blanc. Finally there was Sandy Allen. A mountaineering icon and fellow British Guide who was awarded the Piolet d'Or for his audacious ascent of Nanga Parbat. The plan was to leave the Tete-Rousse hut and climb the 1700 vertical meters to the summit of Mt Blanc the next day. The dilemma was whether to have the breakfast offered at 3.30hrs or 5.00hrs. The issue was that there was a spot of indifferent weather forecast for the middle of the day. An early start would potentially avoid this . The flip side was starting too early could mean that at its best we would summit in the dark OR it was just too cold to summit. The information from fellow Guides [Stuart] descending back to the hut was it was very cold. I choose the later breakfast. We left the Tete Rousse at 5.45 hrs. We climbed in parallel with Blaise and his journalist client. The journalist took photos of Catherine and I . We are now immortalised somewhere in the French media. Less than an hour and half we arrived at the old Gouter Hut. We stopped to strap on crampons over trousers and thicker gloves. 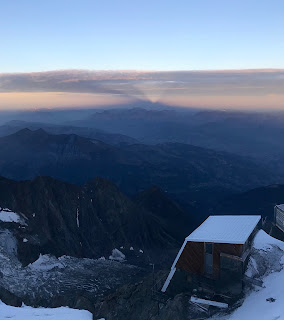 Next it was a plod up to the Dome de Gouter. There was a very good track and because of our later start we could see where we were going and enjoy the experience. We were motoring. We stopped at the summit of the Dome de Gouter to drink down some tea and munch on some snacks. Our next stop was at the Vallot Hut . 4300m. We put on our anoraks because the wind was building. We continued on.The whole nature of the climb changes here . We joined a narrow steep ridge, the famous Bosses Ridge ,which was buffeted by the wind . After all it is Europe's highest ridge. Catherine started to have her first doubts. I gave my standard MR Motivator response. "I have never failed above the Vallot Hut and I'm not going to fail now." The next time Catherine looked anxious we stopped to employ the secret "Wim Hof" breathing technique [ something that is set to potentially be a game changer in high altitude climbing] Then finally when people are running on empty and the summit is within touch , something that never fails: A hand full of force fed Gummy Bears. Miracle "food." 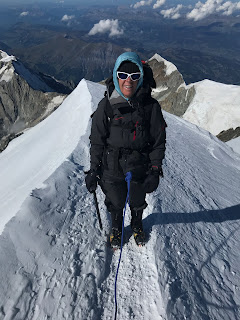 A few more steps and the summit was exclusively ours . It was 11.45am. A very respectable and impressive six hours for the ascent. An emotional hug , the summit to ourselves a few photos then an easy couple of hours back to the Gouter Hut and several celebratory beers . 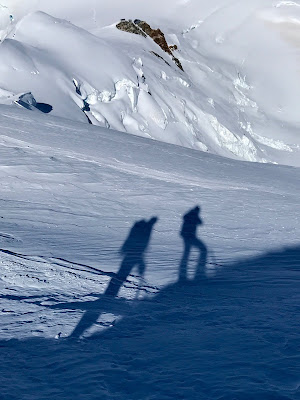