It must have been twenty something years ago since Turi and Agust had climbed Mt Blanc.  They subsequently fell in love with Chamonix eventually becoming my neighbours.  They first asked me to climb Mt Blanc again in 2007. For a variety of reasons we never managed it.  Finally in early September we did climb Mt Blanc.  Below is how we set about it:

Firstly it is crucial to be well acclimatised.  Most people gain their acclimatistion by staying in mountain huts and climbing mountians around Chamonix.    This clearly works for a lot of people, but  a far better alternative is to go to the Monte Rosa region and go up to the Gniffetti Refugio.  The refugio is brilliantly run by the extremely delightful and competent Erika and her team.  The food is of restaurant standard and they have a wine list which would not be out of place in the Cipriani.

Of course a refugio like this gets booked up quickly, especially at the weekends. And yes Agust and Turi's very tight schedule meant we needed a reservation at the weekend and the it was full.  Yet there was a solution because it is possible to book "a hut within a hut." There is the  little known room called : 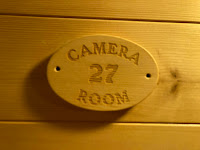 Here you have your own room and all meals are served with in.  To cap it all the refugio is high at 3647 meters which makes it perfect for acclimatisation. [Plus its quite sensible to have some isolation during these times.]

We drove around to Gressoney in about two and a half hours.  We then took the series of cable cars which catapults you up to Punta Indren. This then leaves you with about an hour and a halfs walk to the Refugio Gnifetti.

The next morning we had breakfast at the relaxed time of 6.00hrs.  Agust was complaining of a bad altitude related headache.  Or that is what he said.  There being no correlation between the several beers and  two bottles of Gaja we consumed the previous evening.

Anyway off we went and headed up the glacier to climb Pyramid Vincent at a very respecatble 4200meters. The view from the summit is spectacular looking towards the Italian lakes and Milan beyond.

We had timed it well because we had the summit to ourselves. Next we climbed Coro Nero another simple 4000 meter peak - infact probably the easiest 4000meter peak there is. After which we descended back to the Gnifetti Refugio for a late lunch and more acclimatisation.

The next day we set off an hour earlier and climbed up to the col de Lys at 4300meters.  This is the divide between Italy and Switzerland . If you were to continue down the other side, eventually you would arrive in Zermatt. From our high point we got a glimpse of the Matterhorn.

With Mt Blanc as the main goal it is vitally important to take a "big picture view."  With our acclimatissation plan completed we choose to descend rather than climb more mountains and end up  getting  unnecessarily tired.   This is a constant mistake I see people make. That is to say their training climbs are too ambitious.  We descended back down to the cable car . 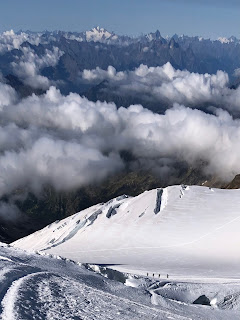 This was not before we were passed by a guy on a mountain bike slaloming through the crevasses.

We drove back to Chamonix for a good rest and plenty of food.  So far our preperation had been perfect.  In addition the weather forecast was excellent.

We reconvened the next day at about noon.  We took the cable car from Les Houches to Bellevue from where we caught the train to Nid Aigle.  We then walked to the Tete Rousse Hut where we had a reservation.

A reservation in the Tete Rousse  is not ideal for climbing Mt Blanc, but its better than nothing.  Ideally a reservation in the Gouter Hut is optimum.  But that had proved impossible.  The net result is you have to start with an extra 800 meters ascent in the morning.  That  translates to a very early breakfast : 1.30hrs.

At 2.15 we were off .  We crossed the notorious Gouter couloir without incident and steadily climbed up to the old Gouter Hut.  Our previous acclimatisation plan was working well because Turi and Agust were zooming along.

At the old hut we stopped to put on crampons and warm clothing , grabbed a drink and some food.  It was still well dark.

Next it was onto the Vallot Emergency Hut. 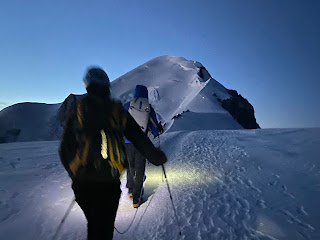 Conditions were perfect .  It is normally about 2 hours from the Vallot hut to the summit.  We made it in just under 2 hours.  On the summit there was no wind you could light a match.  This was good for us but not ideal for the people with para-pentes who planned to fly down. They need a head wind to inflate their shoots ] otherwise they have to run like mad inorder to inflate.  That is fraught at 4810 meters.

From the summit it is "just" a matter of retracing the route back to the Tete Rousse Hut , grabbing a quick drink and then continuing back down to the train.  A mere 2000 vertical meters and 14 hours of non stop effort.