On the Monday the weather forecast was indifferent for Chamonix. But just over in Switzerland it was much better . So we headed up to the Emosson Dam. Parked the car and jumped on a free shuttle bus which whisked us to the other side. [The bus was provided by the construction company who are repairing a leak in the dam wall!

We climbed the Aguille de Van which proved to be an ideal shake down day. 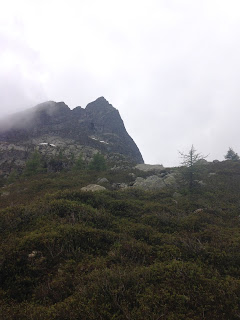 On the Tuesday we did the classic traverse of the Crochue .We did stay dry , but we saw nothing! 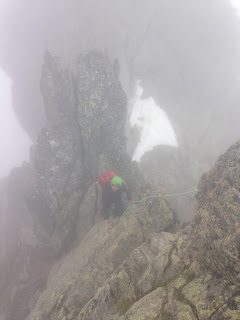 Dee had to take my word when I announced we were on the top. 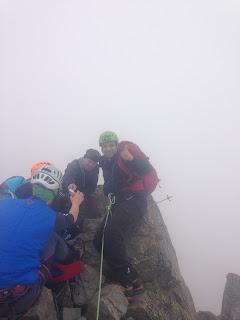 Then on the wednesday believe it or not the sun came out! So we were all psyched to head up the Aguille du Midi. Yet when we turned up the whole world had the same idea and the Que was round the building. Plan B - through the Mt Blanc Tunnel and up the brand new lift at Helbronner. This proved to be a much better bet. The new lift is sensational. As the cable car goes up, it also spins around on its axis. The lift station is like a cross between a 5 star hotel reception/a cathedral. It is jaw dropping. We were able to do the complete traverse of the Aguille du Marbree. 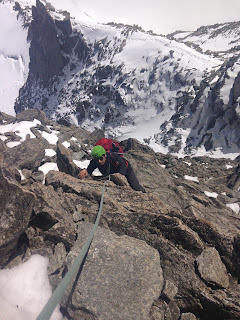 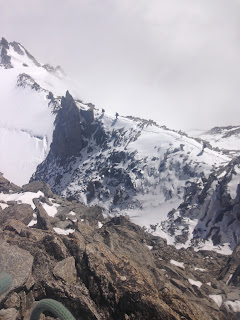 Thursday - we now had a stellar forecast and so we headed round to the Grand Paradiso. We walked up to the Vittorio Emanuelle hut in an easy couple of hours.

Friday breakfast at 4.00 am . We were away soon after. Gradually we overtook all the other parties , not by going quickly but just by not stopping. Yet when we summitted once again the mist had socked in and Dee was once again deprived of a view. 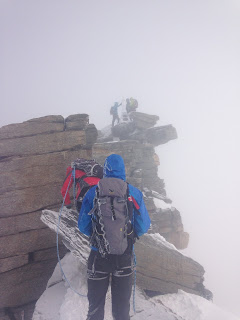 Although we couldn't see much the conditions underfoot were excellent and we charged back down the snow to the hut in 2 hours.

On the Saturday we were a bit tired so we opted to go up to Plan Praz on the Brevent lift where did an excellent but very chilly rock climb .We climbed the Éperon de doite, 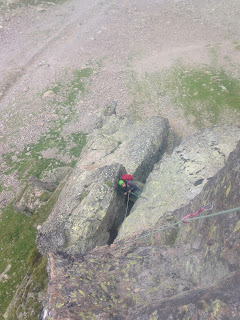