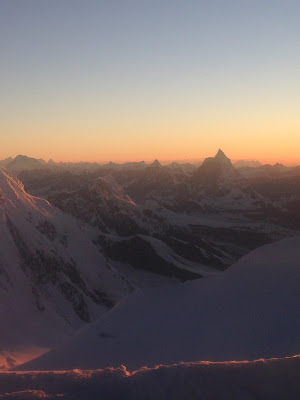 David Folkman and Dee Anand joined me for an expedition to the Monte Rosa massif high above Gressoney/ Alagna just up from the Aosta valley.

On the Monday we drove from Chamonix to Gressoney. We left the car and rode the lift system to Punta Indren and then walked across the very snowy glacier to the Mantova Hut.

Tuesday the weather was indifferent - windy cloudy but warm which meant the snow did not freeze over night. Despite this we battled our way to the summit of Vincent Pyramid 4200m before turning tail and retreating to a wonderful welcome at the Gniffetti Hut. Amazing food, beer, wine super fast wifi and showers all at 3600 meters above sea level.

It was so good we decided to spend an extra night here and use it as a base from which to climb a few more mountains the next day.

So on the Wednesday with brilliant weather we climbed Ludwigshohe 4341m Coro Nero 4321m.

On the Thursday we headed up to the Margherita Hut - the highest building in western Europe at 4554meters above sea level. 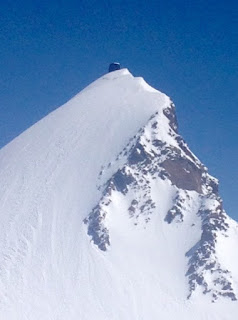 As we took in the sunset from the hut , little did we realize that this was to be the sun setting on the UK's membership of the European union. 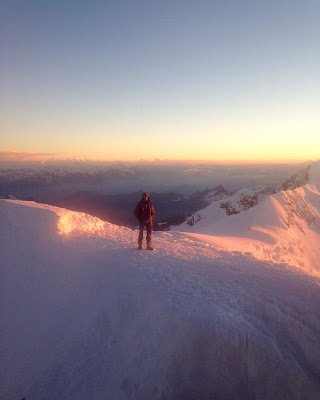 We awoke to the devastating news that Britain had done the political equivalent off cutting its nose of to spite its face. David Dee and I were in a state of shock. The other continental teams of climbers were like wise. They offered condolences to us as if someone had been killed. Never had I had breakfast in a mountain hut which such a sombre mood.

After breakfast we set off down the mountain back to Gressoney. By the time we drove all the way to our lowest point at Pont St Martin in the Aosta Valley we had descended over 4 vertical kilometers.

Inevitably with constant communications and access to the media via our I Phones it was clear that the UK was in melt down.
The larger ramifications should have been obvious to even a blind man galloping by on a horse, slightly less obvious are the ramifications for British Mountain Guides working in the Alps:

British Mountain Guides came her in good faith under the free movement of labour. As Guides we were at the forefront of this concept. Something that is now not open to our children. In addition because I have been in living in France for 25 years I became disenfranchised after 15 years and was therefore ineligible to vote on something so critical to my future and my families future.

Further if we follow this to its inevitable conclusion it will probably mean the break up of the UK. From a Mountain Guides perspective this will mean the end of the British Mountain Guides Association which will be forced to split into an English & Welsh association with Scotland forming it own association. This will destroy the brand and sponsors will abandon it. The BMG has amongst its members some of the best mountaineers in the world. It is as the forefront of developing "best practice" within the field of teaching mountaineering. The BMG celebrated its 40th anniversary last year. It is sickening to think all this work will be torpedoed.

Even by the time we arrived back in Chamonix the insidious comments were starting from EU Guides. The very next day I was on the hill . While strapping my crampons on a Guide strolled over to me and said:


"Oh are you still here? Shouldn't you be only climbing on Ben Nevis now?"

The parallels with the neanderthal comments directed at for example Polish people in the UK are terrifyingly obvious .

It's not much comfort, but I experienced a similar 'Brexit' experience in a remote youth hostel in the Lake District. I do hope things work out OK for you.
Martin B
PS John Howarth's children still use their Chamonix apartment, but John hasn't been for many years. He had depression, then a stroke, but is slowly recovering from both.