Stephen Kellock had come all the way from Canada to climb with me and discover what the Alps were supposedly all about. We had climbed a variety of routes around Chamonix and we were building towards the end of the week. I was keen to finish with a spectacular flourish. Unfortunately the weather was not co operating. In fact in mid July it snowed down to 1800 meters -tree level and therefore torpedoed our chances of getting really high. Luckily I have a bunch of alternatives for these situations :


As you drive down the Auto Route Blanche from Chamonix towards Geneva straight in front of you will see a huge barrier of mountains collectively know as the Aravis. The center piece is the spectacular Pointe Percee.2750m If your not sure where it is ,a huge brown tourist sign at the side of the motorway signifies when to look out of the car window.
Quite a few spectacular peaks which are judged on their looks rather than their height have been grouped under the rather unfortunate name of "Ultra Prominent Peaks." Or even worse just Ultras..

Putting this aside whether you like the tittle Ultras or not, I have always thought what it looks like is a far better reason to climb a peak than its arbitrary actual height. All this tends to do is lead you to some horrendously crowded summits. The antithesis of why we climb mountains and may be why your reading this Blog?

Point Percee means in French the pierced point because in its north ridge, the Arete Doigt , is a naturally formed hole. So that is where Stephen and I headed. We drove from Chamonix past Sallanches left the motorway at Cluses and headed up the road to the Col de le Colombiere which had just been treated to a velvet layer of tarmac in preparation for the Tour de France.

We drove through Grand Bornand and then headed up to the Col des Annes where we we due to dump the car, before heading up to the Refuge. What I had overlooked was that it was 14 July - Bastille day - French national holiday . The car park and approach roads were rammed with cars seemingly abandoned as if a nuclear war had just happened . We were in a car fit for the job and managed to find a slot on a hillside that resulted in the car being parked vertically balanced on its rear door.

Next we negotiated the series of electric cattle fences and headed of up to the Gramusset Refuge , leaving the crowds behind us. This was to be Stephens first experience of an Alpine Hut. It was to be both good and bad. Bad because it was a national holiday and therefore the hut was full to the rafters. Literally -

To reach our beds some bravery was needed to negotiate the ladder to our sleeping platform, which was sandwiched 20cm under the roof.

The upside was it was the real deal. A great atmosphere , good food and wine , magnificent situation and some unique washing facilities: 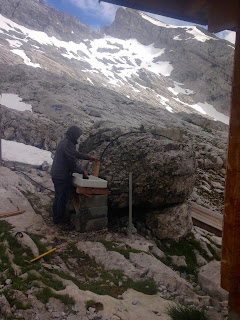 Especially for Stephen 6.30am breakfast could not come around fast enough. Apparently the knock out sleeping pill I had so generously given him did not work. [mine worked fine.]

Breakfast is never the reason to visit a French Mountain Hut and we were away by 7.30am. The weather was clear , but it was windy and bitterly cold. Our approach was across a snow field and we needed to put on crampons to negotiate the bullet hard neve snow: 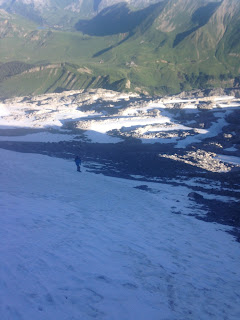 Nevertheless in an hour we were at the foot of the very impressive Arete Doigt. A doigt is a finger and there is a tower that from a distance resembles a digit. Fortunately the wind had dropped and we were able to enjoy the first few pitches. After about five pitches we arrived at the start of the crux , the iconic "Rasor." This is a series of pitches that follow a rocky limestone knife edge ridge. An unforgettable climb in a remarkable situation . It is not difficult but it is intimidating. 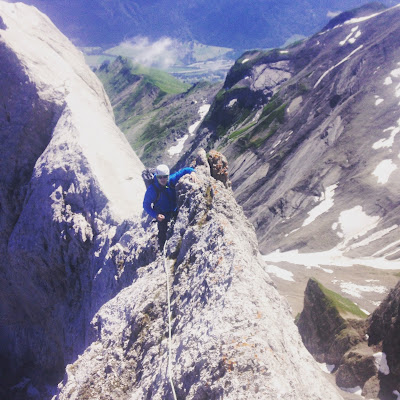 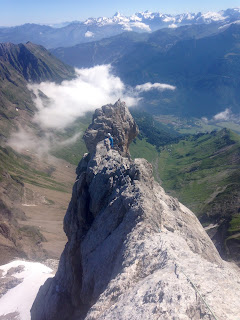 After the "Rasor" pitches you have a choice of continuing up the ridge directly or going up a gully on the north face. The direct route requires rock boots and full on rock climbing ability, neither of which we had and so we elected to take the gully because this makes the overall difficulty of the route more homogeneous. Yet even so it is not entirely straight forward because the rock was chocked with ice and there is little protection. It is necessary to proceed with caution. After about an hour of doing just that [proceeding with caution] we popped out just below the summit. A couple of minutes later we were on top and treated to a spectacular view of entire Mont Blanc range. 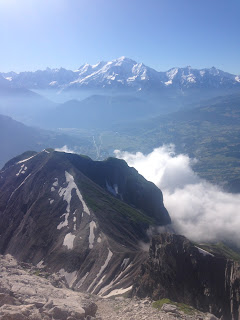