It took a long time.  It was now four years since David Brooksbank emailed me asking me whether he could climb the Weisshorn after a 40 year hiatus.  David climbed the Matterhorn with Ulrich Inderbinen in 1975.  Ulrich was born in 1900.  He worked as a Guide until he was 96. Ulrich is quite an act to follow.  The Weisshorn is sometimes referred to as the "thinking mans" Matterhorn. In many ways it is just as spectacular and a lot harder- a rather more sophisticated climbing goal than its rather Chavy neigbour.  I have even heard the Matterhorn described as a sort of pimped up Ford Escort to a Ferrari but maybe that's a bit of extreme.

I agreed to try to climb the mountain with David and it was clear from the very first steps he would be more than capable.  The trouble was always the weather.  On our first year together it snowed and we went nowhere near the Weisshorn but instead climbed a lot of mixed of alpine routes all over the alps.  The next year it snowed again and we just left and headed for the Dolomites where we had some fantastic climbing.  Last year we did actually get as far as the Weisshorn Hut to find ourselves to be the sole occupants.  This was because it snowed again obliterating our attempt which ended in knee deep snow.

So to 2019.  We were to try again.  Our strategy was to climb a preparatory route that was not only "interesting" but would  provide valuable acclimatisation.  We would then have an easier day so that we did not get too tired before the ascent.  In essence 3 days warm up and 3 days for the ascent and descent of the Weisshorn.  After all, the vertical ascent of the Weisshorn is greater than from Everest base camp to its summit.

We climbed the Arete de Saille on the Grand Muveran.


We stayed in the Cabane de Rambert.  We both agreed that if you wanted the perfect quintessential hut experience then this was it.  A quiet hut with just a few people , a good food and then a spectacular climb with no one else on it. 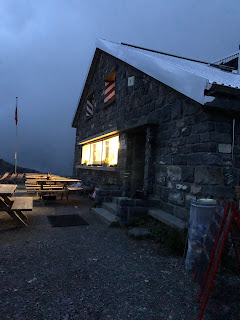 On our third day we ventured into the Vallee Blanche in order to maintain the acclimatisation and to make sure all the ice related kit was working.  We climbed Point Lachenal.

The plan was going fine, then the weather played its part again.  We were forced to re book our night in the Weisshorn Hut and delay a day.  We went rock climbing above Brevent- that was  hardly a sob story. 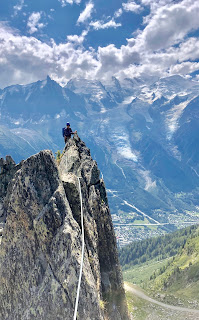 The next day we drove around to Randa and made the long walk up to the Weisshorn Hut.  Meanwhile the weather forecast had changed again.  Our proposed summit day, the next day, was now showing a poor forecast. The other teams bailed. We found ourselves [once again] the only occupants of the Hut.  After a "Council of War"  David and I decided to sit it out at the Hut because the next few days promised stellar weather.  This had pro's and cons.  The main pro was that we would gain valuable acclimatisation and rest .  The cons were that David would have to change his flights and I would be climbing the Weisshorn on my 25th wedding anniversary. Dinner needed to be cancelled. 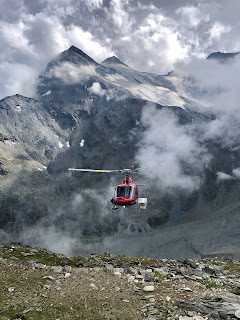 Fixing the Hut water supply was arguably marginally more important than the beer supply as no water would mean no food.  The way to fix the water supply was to hike up to the glacier and re plum the pipe into the glacier.  This is how I spent my afternoon.  I walked up the path behind the hut armed with a long wooden ice axe, not really knowing what to expect.  I followed the pipe to its end where I found it sticking up in the air.  It was an easy fix to dig a hole in the glacier and reposition the pipe so that the glacier stream could flow in to the end of the pipe. 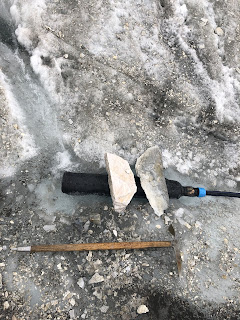 I was not sure how successful this had been until I arrived back at the hut, but I guessed by the hugs and kisses I received from Jacqueline the Hut Guardian I'd fixed it.

There were a couple more moral boosting teams who arrived in the afternoon.  A local Swiss Guide and his client , plus a Polish Guide and a Ukrainian Aspirant Guide, the later was apparently being assessed for his Guides badge by the former.  How this was going to work was beyond me, because neither of them could speak each others language and the only mutual language they had was English, of which neither of them [as far as I ascertained] could speak that very well either.
Anyway three parties in total.

The alarm went off at 2.00am.  We were away just before 3.00am.  All the stars were out.  Not a breath of wind.  Was this to be our day?  Progress was smooth, steady and incident free.  We made it to the "Breakfast stop"  a place on the climb where we join the the true east ridge. 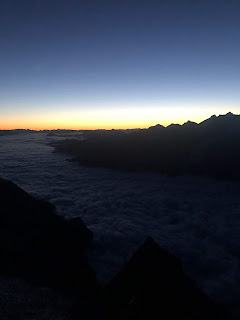 The rock on the ridge now becomes solid and the climbing straightforward but  airy.  Firstly over the Lochmatter Tower and then over and around several other towers, before the rock ridge turns to a snow ridge.  Or in our case an icy snowy  ridge. 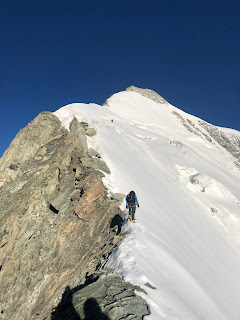 The other parties elected to pitch climb the icy sections.  We choose to climb moving together.  We were able to do this because in the four years we had been climbing together I knew David would be just fine.  Inevitably by not pitching the climb we arrived on the summit first followed very closely by the Polish/Ukrainian team. 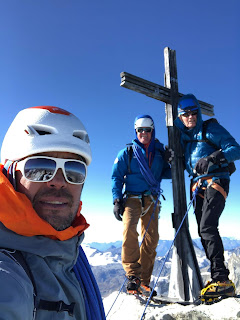 There was now the issue of getting back down.  Maximum concentration is needed at every step.  The icy ridge was a bit softer on the way back which helped the crampons bite well.  But every step potentially could be your last.  The rocky ridge went well and I lowered David down off the towers then rappelled my self.  The big pain was the ground below the Breakfast Stop.  In the dark we had not appreciated what a pile of rubble it was.  And a constantly moving pile.  It was difficult to find the best path because there were so many false trails, it was uncomfortably hot and we were tired.  Eventually after stopping for a swim in a glacier pool we arrived back at the Hut after about 15 hours.  Too tired to contemplate the walk back to the valley we elected to stay the night.  My status as the Huts favorite Guide was still intact and we were treated to beer and an extra special private bedroom.
After a leisurely breakfast, good bye hugs from Jacqueline we departed for the valley.  We had finally made it.