The finest Granite climb in Europe?


There is never much point trying to crow-bar a particular wish to climb an alpine route into an unfavorable conditions and a mixed weather forecast.  That is to say ,work with what you have.
Not for the first time, this is what happened to Charles Sherwood and myself.  All the routes we had outlined as possible goals, were either falling down [Walker Spur] Unapproachable because the glaciers were all tortured [Traverse des Drus] Or were ridge climbs covered in too much unconsolidated snow. [East ridge of D'Herens]

The later route  being a possibility, if, there was a stretch of good weather and the snow  burnt off with the sun, but at least in the short term that looked unlikely.  So we decided to head south for a few days to find some better weather.

We left Chamonix,  in the rain and headed for Orpierre where the weather was good.  We had a mix of sport climbing and climbed the classic La Diedre Sud on the  Quiquillion crag.

We reviewed the weather forecast, decided that there was no great improvement in the alps and headed further south.  Cassis and the Calanques.

We climbed the sensational L'arete de Marseille, on the Grande Candelle . although it is supposedly only 5 pitches long, the shear aura of the route and the fact that every pitch is uniquely special without doubt makes it a world class rock climb in a beautiful position made even more special by the fact we were all alone.


We then reviewed the weather forecast and this led us to go even further south: Corsica.  The beauty of the trip is that you board the ferry at 7.00 pm enjoy a perfectly competent dinner, go to bed and disembark at 7.00am the next morning .

We were on the crag climbing at 9.00am, this time complaining about being too hot!  There was some good single pitch rock climbing on rough grippy granite followed by a swim in one of Corsica's idyllic canyon streams.


Our goal for our Corscian trip was to sample some of its classic rock climbs .  We identified two very different style of routes, both in the Bavella region.  This meant getting in to position which meant undertaking a magnificent and  hair raising three hour drive,  [as the crow fly's about 15 km.]  We stayed in the beautiful village of Zonza which was below our objective for the next day. 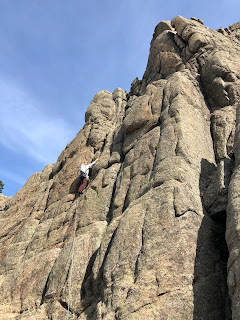 L' Arete de Zonza. This was a  classic route in every sense of the word.  Not just was it "classic" in the sense it was beautiful, it was also classically  traditional in the sense there was very little fixed protection and route finding was demanding if not ultimately rewarding.


The second route trumped the lot.  It soaks up superlatives like none other.  The Dos d'Elephant is the most sought after rock climb in Corsica, often described as the finest granite rock climb in France , if not Europe. This is no small claim and we thought we should see if it was true .  It is a giant slab climb on featureless rock with minimal protection.  When it was first climbed about 20 years ago the bolts were placed on the lead and not many bolts were placed. it must have been mind boggling serious.  Since then it has been retro bolted, but it is still very scary. Where it isn't so scary it is instead just very hard.  Added to which the On-line posts has helpful information like "you must be very comfortable climbing at the grade 6b+ " and you need to have new rubber on your climbing shoes" neither of which we completely qualified for.

Nevertheless the next morning after a viscous steep ascent  we had located the bottom of the route.  Some achievement in its own right. [Subsequently learnt that many of my friends had failed to locate the route!] Charles was keen to stamp his name on the climb too and wanted to lead some of the pitches.  I lead off on the first pitch.  By the time Charles reached the stance his enthusiasm to lead through had waned a little.  But always a man to stand by his word he launched himself at the second pitch with what looked like  impressive commitment, although later he admitted he wasn't quite so committed.  The third pitch was the technical crux pitch after which the rest of the climbs cruxes were in the head- long featureless slabby pitches with a bolt about  every 20 meters- so potential 40 meter screamers...


We were both delighted to have been able to climb this route.  We rappelled back down the line of climb and eventually rewarded  our selves with a plunge in the canyon at the bottom.

After our final night in Zonza we explored one of the sea cliffs called  Barbicaghja outside Ajeccio while waiting for the night boat back to Marseille.