Covid February in the alps is not complete sob story

With the start of February we still enjoyed perfect conditions until a weird phenomenon hit us one Saturday morning .  The whole of the alps were covered with Sahara sand.  This has happened before many times , but not at least in my life time in such a dramatic way.  It never really became light and made the sky look like something out of a nuclear disaster film.

The mountains were turned brown.  Fortunately it snowed and covered the sand up , but it did reveal itself again later when we suffered a thaw.

I continued to explore new areas which I had never skied before.  Some were close to home , for example I had never actually climbed to the top of the aiguille du Posettes from the Le Tour village.  This was a very good way to introduce two, of the few people, who could make it to Chamonix, to the benefits of ski touring. Albeit Matt and Paulo were coming from Monaco. 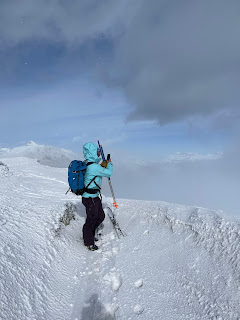 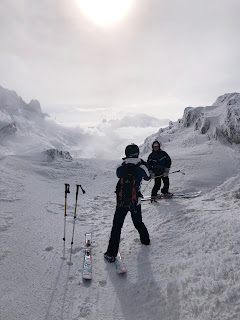 We made most of the ascent in thick mist but burst out at the top to reveal a satisfactory vista.  Yet like so much of ski touring the snow on the way down was far from flattering.

The French School holidays were now up on us .  Normally this means the UK half term too. But not this year.  Mind you considering the lifts were closed the town was still very busy.

It is also interesting to note that despite there being no lifts open in Chamonix and therefore the only up hill mechanism the Compagnie du Mt Blanc was responsible for[ in lest us not forget is  one of the most important ski resorts in the world] was a 60 meter revolving mat. Le Tapis.  It was deemed in dire need of a service because it was potentially going to snap and should be shut down. The ski school were  incandescent about this and so a compromise was reached .  The new parts would be ordered and the tapis would continue to run.  If it did snap before the new parts arrived well sol be it.  Lets trust that  this laissez faire attitude isn't applied to the rest of the lift system when it eventually opens. At the time of writing it still hasn't snapped .*

Andrea ended up with more work than anyone in the Seaton household working solidly day after day at the jardin enfant at the Savoie area near the center of the town. 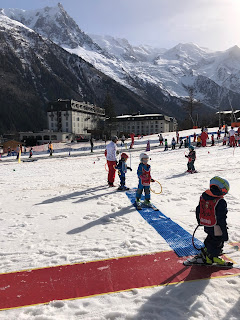 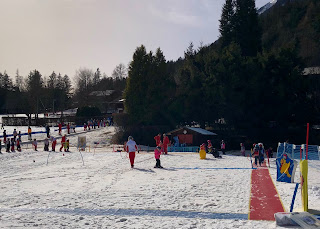 It was interesting to see all the tourists in Chamonix with out the lifts open.  People seemed to be a lot more creative in the things they did, from simple tobogganing , to mountain biking on fat bikes.  There were certainly lots of families actually doing things together, as opposed to the traditional frenetic dash to dump  the kids at ski school so that the parents could 'escape' to ski on their own.

I had become so enamoured with Pointe d' Andey high above Bonneville that after another dump of snow I went back with Sophie and Andrea and we had the best skiing of the season right off its summit. 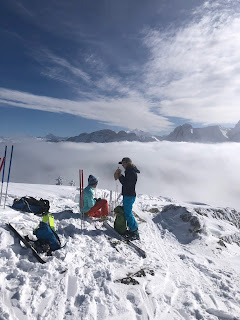 Other stand out trips were through to Switzerland. Namely the Tete Feret high above La Fouly on the border with Italy.

I went firstly with Christine Dennis and son Pierce and husband John.  The conditions were so good that I decided to return to the very same ski tour with Richard and Sam Lewis only a couple of days later. 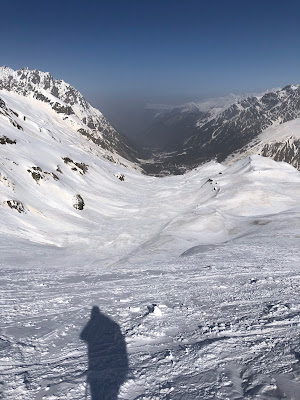 My middle daughter Florence ended up" trapped" in Chamonix and unable to get back to University in the UK.  She decided to make the most of it by training for the next part of her ski instructors exam.  The dreaded Euro Test.  This is the ski race you must pass if you aim to teach skiing in Europe.  It is a timed Giant Slalom race. There are many countless arguments about the ability to race and the ability to teach, which will go on forever, but this is the situation and you have to pass this race if you hope to progress.
Anyway Florence travelled to Alp d'Huez where there was just one race piste open.  She passed and can now continue to work her way through the scheme and join her big sister in the Chamonix ski school.
*
The tapis did snap break down .  Andrea said it was like teaching skiing in the 1900's.
Posted by Mark Seaton at 5:18 pm

How do grains of sand affect the avalanche hazard? Do they slow down your skis? It'll be raining Camels next��