We had a plan .  The plan was to do the Bernese Haute route which starts in Diablerets and finishes in Kandersteg.  It was all looking good .  The forecast was good, the conditions were good , the huts were open, we had confirmed bookings.  Perfect.

Then as the date for departure grew nearer there were the first glimpses in the weather forecast that things were not going to be perfect.  Still doable, but  with suboptimal weather. As our departure date came nearer the weather forecast started to predict snow.  Then more snow and then show-stopping amounts of snow, mixed with very strong winds.  Non of this was ideal but it was due to fall before our trip.  Then the sun was meant to come out and settle the snow pack and all would be fine .  Except it wasn't. The updated forecast put the whole storm back a couple of days.

When the storm hit, it was like a second winter .  We got a meter and half of snow in the garden in the space of a day.   In the whole of  February we had zero snow.

I had to cancel the ski tour and let Mark, Rysto and Til know the bad but obvious news.

They were still keen to salvage something to break the monotony of a Covid winter, so agreed to rendezvous in Zermatt.

Travelling from" no lifts open Chamonix " to Zermatt was like entering another world. Zermatt for all intents and purposes has pretended that Covid doesn't exist. The morals of this can and will be debated for a long time but ,  all the shops , hotels, restaurants were open  and critically so too are all the lifts.

This combined with the massive dumps of snow of the previous few days, while bad for ski touring was now wonderful for lift based off piste-skiing.  Assuming you were careful.

On the Saturday we headed up the Klien Matterhorn lift system , which appears to be constantly undergoing a name change.  This year it's called the "Matterhorn Paradise."

Our first run was down the Furgggletscher, which had good soft fresh snow which was a delight to ski.

From there on we continued down before arriving above , what must be one of the most amazing ski routes in the world the "Chamois glacier cave."   Its a bit nervy,  but there is a tunnel right under the glacier which you can wiggle your way through. 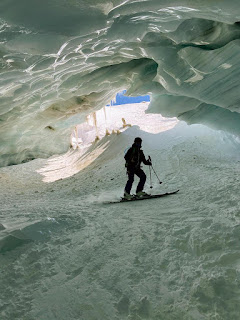 Then the tunnel becomes more challenging :

Before popping out at the other end.

We enjoyed exceptional off piste skiing for the rest of the day and were able to get a sense of where the skiing might be good and safe for our next day.  We enjoyed a social evening in  a real restaurant.

On the Sunday we took a helicopter from the base at Air Zermatt and were dropped at the Alphubeljoch. at 3836 meters.

We found good snow, all the way down to the car park in Tasch. A vertical drop of 2480 meters.