A return after a ten year gap.

I had not seen Tom and Becky for ten years, it was 22 years since we completed the Haute Route together.

I was delighted when they got back in touch and we were able to arrange five days ski touring together.

We started at Les Grands Montets where the last time they had skied here it had had a fully functioning cable-car. That was until  until it burnt down nearly six years ago.  Like so many people they could not get their heads around why it was taking so long to rebuild it.

We skied up and over the col de Rachasses and were treated to the magnificent view of the Argentiere glacier.

On our second day we headed up to Flegere to attempt the Breche du Berard.  The plan had to be adjusted because the weather was getting too hot and the avalanche risk was increasing.  We therefore did the shorter, but classic  Col Crochue/Col Berard ski tour.
This descison proved to be absolutley the correct one judging by the avalanche debris we had to negociate at the end of the tour. 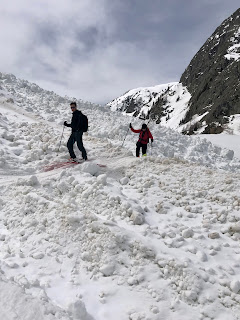 On our third day we drove around to Les Diablerts and took the lift to Glacier 3000.  From here we climbed the summit of Les Diablerts.
The ski back down was very good, and we left 3 sets of neat  tracks which were not disturbed because we were the only people around.

We then skied down to Le Cabane Diablerets, where we were the only guests for the night.
On our next day the plan had been to make the long traverse to the Cabane Audannes.  This is not what happened:  We left the Cabane at about 6.00hrs.  There was a good freeze, which made it safe, the flip side of this was that it made the ascent out of the hut difficult to skin.  Yet it was after our ski down to the Col Sanetsch where our problems really started.
In an attempt to double check the skis were really locked on to the boots I kicked the lever on Becky's right binding.  Then kicked the lever on the left one. It just exploded into bits all over the snow.
I managed to find all the bits and fixed them back in place, but it was clear it was not safe to continue and therefore we must retrace our steps.  Becky was incredibly dissapointed we could not carry on as planned.
We had no alterrnative but to retrace our steps back to the safety of the lift system.  Yet in the total scheme of things we had got off extremely lightly, no one hurt, and no need to call for a helicopter evacuation, which at one point seemed like the only option.
So back in Chamonix [Becky with a new pair of skis] we finished with an utterly stunning final day.  We started at the summit of Le Brevent. We skied down the north side of the ridge on wonderful spring snow towards the Col du Brevent.  If you turn right you head back into the lift system.  We turned left and skied down a steep gulley, mostly on good snow.  The scenary and the situation, not to mention the conditions were perfect.
We then skinned back up the slope towards Lac Cornu.
Next there was the crossing of the frozen Lac Cornu.
We then skinned up to the Col de la Gliere where we stopped for a bite to eat before skiing down the comb de la Gliere and rejoining the piste.  Amazingly despite the perfect conditions we saw no one on our tour giving us a feeling of solitude that is  sought after but is often  hard to find.
Posted by Mark Seaton at 1:31 pm