Vincenzo and Richard joined me for three days ski touring.  The challange was that the conditions were poor.  It had not snowed for a month and seemingly summer was approaching having completely skipped spring.

I had long ago booked the Albert 1er Refuge, but it was becoming clear that it was not going to be possible to get to it  because of the state of the glacier. [This month there had already been many people falling in many crevasses.]

Therefore started with a day tour,  behind Le Brevent and ending in La Flegere.  The scenary was to its usual standard. 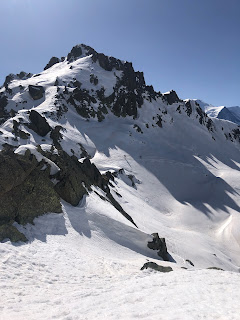 Vincenzio and Richard were dissapointed that we could not safely go to a refuge, but were more than happy with the Plan B :  An overnight at the Gd St Bernard Hospice, where I knew there was very good snow cover and no nasty crevasses to fall into.

We drove around, or Vincenzo and I did, Richard turned up later because he couldn't find any where to charge his electric car...

We then headed up the road to the Hospice.  Before arriving at it , we took a detour and climbed up to the col de Barasson and were treated to wonderful views.  After which we skied down on some good snow back to the road and continued up to the Hospice arriving late afternoon.

The next morning we were treated to beautiful cold weather. Our plan was to climb Mt Fourchon the classic and popular tour from the Hospice.

The ski around the lake was beautiful.

We made good time to the summit of Mt Fourchon.  The ski back down was, considering the overall conditions, was fine.  We retraced our steps back to the Hospice and then skied back to the car and ending a very successful three days.