The end of November we got a good cold dump of snow . Everyone was happy Eddy the new Bernese Mountain Dog had setttled in and things were looking good. 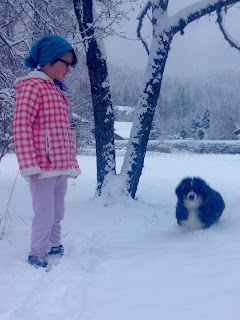 Then that was it sun sun sun . Come Christmas all the snow had gone.

Eddy now considerably bigger was confused : "What the hell has happened to all the snow?" he said . 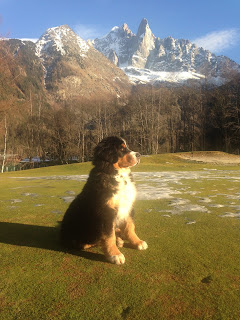 So to the tricky question of skiing. Luckily the weather had been beautiful [hence no snow] which it meant it was possible to go high. I always think that Les Diablerets is a very good option and although it is an hour and halfs drive from Chamonix it is worth it. I went there twice in a week once with Peter Whelan and then with Stephen Yeates and Steve Trantum. The snow and conditions were excellent. 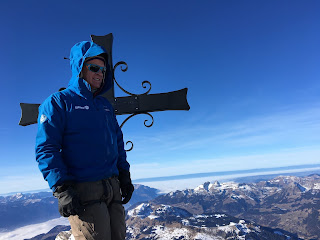 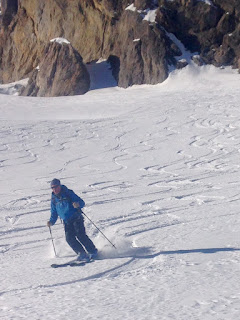 A couple of days later again with the 2 Steves we headed through the Mt Blanc tunnel and up to the [I believe] unique revolving cable car : The Helbronner. From its summit we entered the Vallee Blanche via an elevator followed by a tunnel which leads directly to the glacier.

Instead of skiing down the Vallee Blanche [due to a lack of the essential ingredient] We skinned up to the col de Entreve where we were treated to spectacular views in every direction - particularly Mt Blanc : 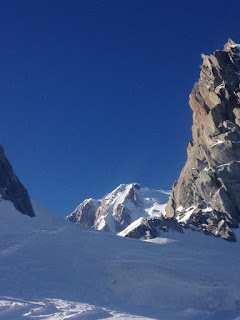 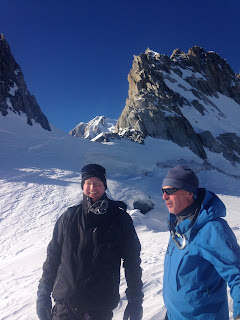 We then skied back the way we came on some very good snow but at the same time avoiding the double-decker bus swallowing crevasses.
A day later we skied at Grands Montets. Unusually for the Chamonix lift company they had made the effort and managed to open the top of Les Grands Montets where we found some excellent snow. This lead very nicely to the Chalet de Lognan where Eric [better known in Argentiere for his dread lock] is the chef in charge of cheese dishes [which were very good.]

Eventually there was a change in the weather - no more blue skies, but instead rain . Rain rain rain,but at least it would be snowing somewhere? Well actually no. It was just rainat all skiing altitudes. Then it snowed. Then it rained. All this resulted in a massive avalanche risk. A few days past and the weather and snow conditions settled down: momentarily.

Leo Vita-Finzi took a day off from his work with the UN in Geneva to ski with me. We failed to get past he door at Grands Montets because it closed in front of us due to horrendous winds. We headed down to Les Houches which had excellent snow in the morning but when we ventured out after lunch it was raining..

On the 10th January Peter Whelan and I were due to ski together. It was raining hard in Chamonix. Anywhere was going to be better than staying in the valley. A quick look at the meteo showed that through the Mt Blanc Tunnel it was a good deal colder and snowing hard. We went to La Thuile where we had astonishing skiing and a very good lunch 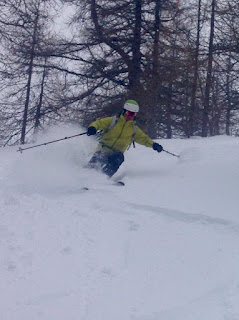