A Mountain Hut with a difference.

Peter Whelan and I skied at Le Tour for our opening day.  The north facing slopes continued to hold very good snow and good skiing. 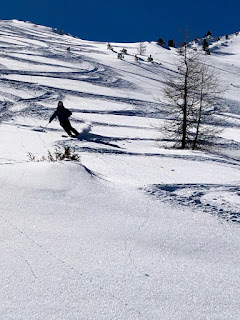 The following day we were joined by Peter's friend Glen and we headed to Gressoney for a three day two night expedition to the Orestes Hutte.  The plan was to use it as a base from which to explore the area both by skiing off piste and doing some ski tours.
The first thing to say is that the Orestes Hut is not actually a Hutte ,Refugio, Cabanne, Abri,Refuge but rather a "Retreat."  Firstly it has private rooms with en-suite bathrooms. [Although there is dormitory accommodation]
It is equipped with a Yoga Room , complete with Yoga paraphernalia .  Yet arguably its most unique feature is it only serves Vegetarian /Vegan food.  This rather radical in the Alps where the traditional diet of dried meat still dominates.  Still the food was delicious , beautifully prepared and presented.
Whats more is that the Orestes Hutte had been built next to a spring so there was plenty of fresh water to drink.  This had eliminated the need to sell  plastic bottles full of water. The view from the dinning room at sunset was impressive. 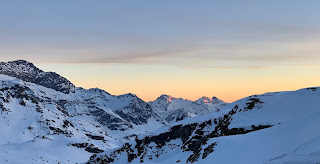 After our first night and a good breakfast it was a traverse back into the ski resort, where we picked up the lift which took us to the start of the days ski tour the Col du Zube. 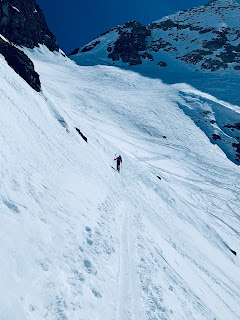 On our final day  in Italy we used the lift system to access a long off piste descent into the  Alagna Valley before finishing up at a mountain restaurant which we all agreed served the best pizza any of us had ever eaten. 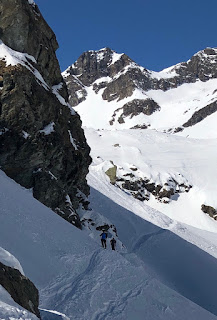 After which we rode the lifts back into the Gressoney valley , before skiing down to the car and driving back to Chamonix.

On our final day it was just Peter and I.  We choose to climb up to  Lac Blanc from La Flegere before catching some good spring skiing back into the resort. 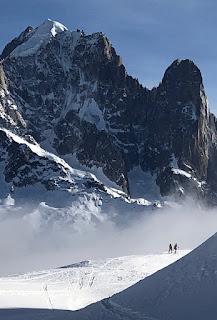