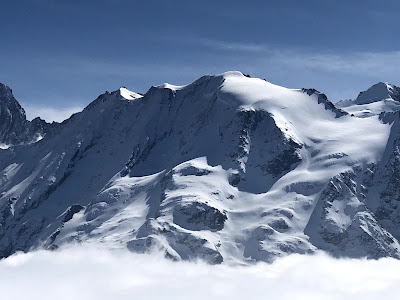 April, at some point. always brings unstable weather with the change of the equinox - "April Showers."

Last week was no different.  Charles Sherwood joined me for six days. On  our first day together it was snowing, making it less than ideal for ski touring.  Nevertheless we still managed to drop off the back of Rochbrune at the back of Megeve and climb over the border ridge between the Haute Savoie and the Savoie and ski all the way down into Hauteleuce.  From there we picked up the Les Contamines lift system and continued our circular tour back to Megeve. This was quite a feat because two weeks previously I had had a 20 minute walk down muddy fields .


The forecast for the next couple of days was going to be our chance to do something significant.  We identified the traverese of the Domes de Miage and the descent of the Armancette glacier as our goal.
After pre-dumping a car at the car park which we hoped to arrive back at, if the plan worked. We parked our second car at in Les Contamines, shouldered our packs and walked past the sign post which told us the Conscrits hut was  6 hours away.  We plodded with our skis on our rucksacks through forests for about 2 hours before we were able to find enough consistent snow to start skinning.  There was a lot of fresh snow .  Luckily for us someone was ahead of us and it is they who broke trail.  We did our best not to catch them up, but inevitably the we did because they just got too tired.

We arrived at the hut tired and hot.  There were only seven of us in total.  The next morning we were on our skis just before 7.00hrs.  Conditions were perfect and we made good progress up to the col before putting crampons on for the final ascent of the majestic  ridge which is one of the reasons the Miage is well known.


At the summit we caught up with a party of three German skiers who had set off slightly earlier than us. We all got ready to ski from the summit.  There were a few tracks in the snow which looked good.  It was therefore a bit of a shock to discover that the snow pack was very thin and merely covered boiler plate hard ice.  Luckily this was negotiated fairly quickly.  Mind you the snow was still not great with some challenging breakable crust.  Yet after a few hundred meters we did eventually hit perfect snow and enjoyed some first rate skiing. 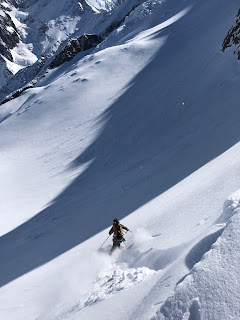 The descent was 2400meters .  We arrived back at our pre dumped car and were able to help our German friends by giving them a lift back to their car , which probably saved them a good two hours of grief.

The next day Charles and I attempted to traverse the ridge of Mt Joly which separates Megeve /St Gervais from Les Contamines.  The weather was non co operative because we got stuck in thick cloud.  We had little alternative  but to turn around because I thought there was a good possibility of falling of the ridge.

The next day the forecast was for it to be cold and windy.  It was cold and windy but we decided to see if we could ski tour over the Col de Crochue.  We headed up the Flegere lift and at the top of the Index lift we poked through the cloud and we were able to continue.  Alone.  This is a fairly unusual thing to do on this particular ski tour, as it is with little doubt the most popular ski tour in the world.

At the top of the col we skied down in very good snow.  We elected to skin up to the Breche du Berard. Yet  the mist rolled in and we were forced to climb the whole ridge in a white out.


Mind you we enjoyed good snow in the Berard valley on the other side and were able to ski all the way to the Hotel Du Buet, where we discovered the train had been cancelled.  Fortunately we were able to persuade my daughter Florence to come and collect us.


On our final day we decided to attempt the traverse of Mt Joly again.  I a woke to thick mist.  It did not look promising.  Yet we still decided to go and have a look, because the forecast was for it to clear . After some waiting around drinking coffee , some blue holes appeared in the sky.  We arrived on the ridge to a world class scene .  We were treated to a view of the entire descent of the Armancette glacier , plus the whole of the Mt Blanc massif which was seemingly sitting on a bed of cloud.

We made our way along the ridge, but not before the cloud rolled in again making navigation very difficult.  We sat down for a bite to eat and a drink hoping that the mist would clear enough.  I also manged to drop my phone in the snow.  It slid out of reach.  It stopped .  Then just as I thought I could grab it , the phone started to slide again.  It went faster and faster and then disappeared like a hockey puck out of sight.  I skied off after it thinking it was a very expensive mistake. There was no sign of it.  Then about 100 meters further below I saw a black speck in the snow. I found my phone.  Whats more my descent had taken us below the cloud and we could now see enough to continue safely.  I called to Charles who was incredulous that I had found the phone.  We hit some very good spring snow and enjoyed a fabulous run back into Les Contamines ski resort.

Well done finding your phone and some good ski tours with Charles. Say hi to him from me. Great spring weather in Scotland.