If there is better spring snow skiing than this - then show me what it looks like.

This was a week of skiing that started well with good conditions and then it just got better and better.

John Young joined me for six days of skiing.  There was no real plan other than to go where the snow and conditions were best.

Day 1 : We decided to kick off with  a visit to Les Grandes Montets and " take advantage"  of  the fact that most of the lifts are broken. The benefit is that the whole area has returned to a true skiers paradise. We skinned up to the Col du Rachasse in about an hour and were then able to ski under the north face of the Doites and despite it not having snowed for over a week we found plenty of cold fresh snow.
Day 2: Weirdly the temperature dropped and the wind was due to blow from the north.  All the lifts were closed in Chamonix.  We simply changed venue and headed for Combloux from where we climbed the Croisse Baulet.  Mind you it was super cold and we wore every stitch of clothing while steaming at full speed up hill in an attempt to stay warm.

The descent started rather badly because it was so cold that the snow had not softened up.  We were thrown around on our skis. Yet about a 100 meters lower down it all changed.
We found spring snow and enjoyed a sublime descent all the way to Geittaz.  In fact from that moment on [although we did not yet know it] every single turn of the entire week was going to be  perfect.  As John said  "Ridiculously perfect."

Day 3  The wind was still blowing hard high up so we decided to head to Megeve with the creative idea of skiing off the back of Rochbrune, before skining up to the ridge line which is the border between the Haute Savoie and the Savoie departments. From there we skied down into Hautleuce.  Here again we found perfect spring snow.   There was one small snag .  We ran out of snow and had to walk down through fields of mud and cow shit, [but mainly cow shit.]  Still it was a small price to pay.  We walked down to the lift which took us back into Les Contamines lift system [ Not before we stopped for some rehydration thereapy].  We finished by skiing into the village and then taking the shuttle bus back to St Gervais where we had left the car.

Day 4.  While we had been skiing through Les Contamines we had sussed out the general conditions and had been able to see that the snow cover was exceptional.  There were boundless possibilities which in other years are just not an option.  We came up with a rather ingenious plan  to traverse the ridge of Mt Joly and drop into the lift system of Les Contamines.  We set off from St Gervais and rode the lifts before sticking our skins on and climbing to the summit of Mt Joly.  This is not for the faint hearted and a good head for heights helps. [We had taken Ice axe and crampons in case of need] Mind you it is a world class setting .  John remarked that he had never been in such an area with skies on his feet. 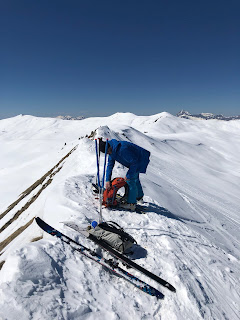 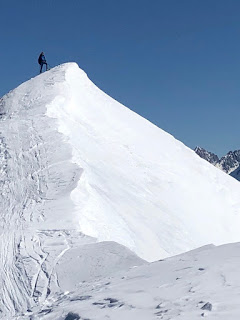 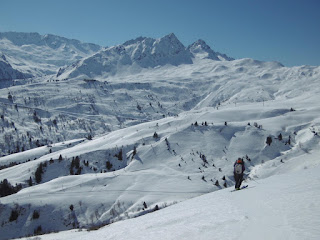 It took a hour or so to negotiate the ridge , before we could safely leave it and ski down to Les Contamines, but once we found the best slot the skiing was perfect and we arrived for a late lunch and beer.

Day 5.  Conditions were so good in Les Contamines that it was a no brainer but to return the next day and just ski off piste using the lifts.

Day 6.  Back in Chamonix for the traverse of the Breche du Berard.  Again clear blue skies, yet being a Saturday there were many many people all heading up in our general direction.


Fortunately we had chosen not to do the classic Crochue /Berard traverse but rather the Brche Berard.  This tour climbs up a stunning ridge with the whole of the Megeve ski area in the background. 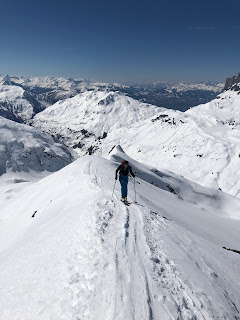 The route then continues to the Breche. 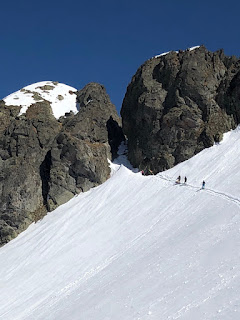 It is then skies off again for the short scramble through the Breche. 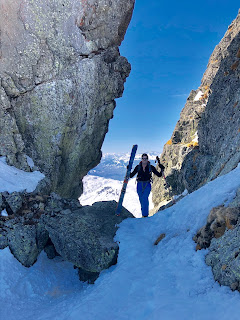 This capped off a sublime week of spring snow skiing.  The week is a good example of being able  adapt our schedule to the weather and conditions and using local knowledge to find the optimum snow.